Four straight victories combined with the mediocre play of the rest of the NFC East leave the New York Giants with a chance to become the first NFL team to make the playoffs after an 0-6 start. That still doesn't mean the odds of that happening are good, however.

PredictionMachine.com puts the Giants' chances of reaching the playoffs at 8.8 percent heading into Sunday's Week 12 showdown with the Dallas Cowboys. PlayoffStatus.com is only slightly more optimistic, putting the probability at 11 percent. Football Outsiders, using its own DVOA formula, is the least optimistic of the sites surveyed. FO gives the Giants only a 3.4 percent chance of reaching the post-season.

Now, let's look at a few tidbits of information from the Giants' PR staff. 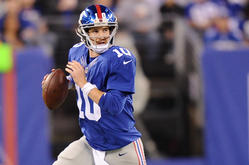 -- This first one is called putting a positive spin on a negative stat. Andre Brown (after all of two games) leads the Giants in rushing with 181 yards, followed by Brandon Jacobs (163), David Wilson (146) and Peyton Hillis (127). The Giants  join Indianapolis and New Orleans as the only teams with four players who have rushed for more than 125 yards.

-- The Giants' longest run this season is 18 yards. They are the only team in the league without a run longer than 25 yards.

-- Victor Cruz's eight receptions in the victory over Green Bay increased his career total to 226. That moved him past Steve Smith (220) and into 19th place on the Giants' career list. Cruz's 110-yard outing was his 16th career regular-season 100-yard game. That is third in Giants history, behind Amani Toomer (22) and Homer Jones (17).

-- Hakeem Nicks' four catches left him with 297 for his career. He needs three receptions to become the 10th player to catch 300 passes in a Giants uniform. Nicks' 50 receiving yards increased his career total to 4,346 and moved him past Del Shofner (4,315) and into 10th place on the Giants' career list. Bob Tucker is in ninth place, 30 yards ahead of Nicks.

-- The Giants, FedEx and New York Cares will host their 18th annual Coat Drive this Sunday, when the Giants host the Dallas Cowboys at MetLife Stadium. Fans are encouraged to bring new or gently worn coats to any of the FedEx trucks or volunteers located at each stadium entrance. New York Cares will distribute the coats to homeless shelters, community organizations, centers for battered women and agencies serving senior citizens across the metropolitan area.

Is Hakeem Nicks really costing himself money with his play this season? One former NFL player agent doesn't think so.

Justin Tuck and Antrel Rolle know that Tony Romo of the Cowboys is a more accomplished quarterback than any the Giants have faced during their current four-game winning streak. They aren't worried about that, with Rolle saying Monday that Romo is also "going up in class" when he faces the Giants' improved defense.

Justin Tuck doesn't have huge sack numbers this season, but overall is playing as well as he ever has. Tuck said he is having fun playing football again.

Prince Amukamara is blossoming into an all-around player.

How did the Cowboys take the comment by Jason Pierre-Paul that the Giants are going to "put it on" the Cowboys this Sunday? "He’s supposed to feel that way," Dez Bryant said Monday. "You’re an opponent. We’re an opponent for them. It’s great confidence."

Dallas coach Jason Garrett isn't surprised the Giants have climbed back into the division race. "They’ve been a good football team for a long time. They’ve got a lot of good players. They’re doing what winning teams do, and I don’t think that’s a surprise or a revelation at all."

Don Banks of Sports Illustrated wrote this week that "I'm starting to the think the New York Giants have the rest of the NFC East right where they want them."

Sports On Earth has an entertaining take on the state of the NFC East.