BBV's resident fantasy football expert takes a look back at Week 11 in the NFL, and looks forward to Week 12 to help you set your fantasy lineups.

Week 12 of the NFL season is finally upon us. This will be the final week our rosters will look like Swiss cheese, as it is the final week for byes in the 2013 NFL season. With Philadelphia, Seattle, Cincinnati, and Buffalo all off for the bye week, fantasy owners will be scrambling to fill roster holes. I will try to help you stay ahead of the pack during the week 12 fantasy playoff push.

First let's take a look at what happened in Week 11.

The Thursday night game gave us some of the biggest surprises of the week. Chris Johnson started the game off running with a purpose and ended up with 17 carries for 86 yards and 2 touchdowns. His night looked like it would be much bigger than that, but still not a bad haul for a low-end RB2. The other Tennessee Titan that surprised was former 49er Delanie Walker who had a huge night with 10 receptions for 91 yards and 1 TD. His recent play has him as a fashionable waiver wire add for owners who are suffering at the tight end position. More on that later. The Indianapolis Colts had two nice surprises of their own. Donald Brown had a great night running the ball as he used 14 carries to cover 80 yards and score 2 TDs. Coby Fleener had a career night for the Colts as he reeled in 8 receptions for 107 yards. I have talked about Fleener for a while and am very excited for Andrew Luck and this Colts' offense with Fleener emerging at the tight end position.

Fantasy owners were expecting big things from Garrett Graham when Owen Daniels went down in Houston, but he has mainly disappointed since taking over the lead tight end role. Well this week against the Raiders he finally went off. He had 13 targets and caught 7 balls for 136 yards and a touchdown. On the other side of the ball in that very same game Rashad Jennings put on a show Bo Jackson would have been proud of. He ran the ball 22 times for 150 yards and a touchdown that will be one of the runs of the year. He ran through D.J. Swearinger on the way to a high-lite reel 80 yard touchdown. While Jennings production has been great to this point there is the possibility that he could be in for a time share with Darren McFadden, when McFadden returns from injury.

The final surprise for me was the goal-line work from Montee Ball with the Denver Broncos. Most fantasy experts thought Ball would have wrestled the job away from Knowshon Moreno by this time in the season, but Moreno has been nothing short of amazing for the Broncos up until this point. Ball got the most work he has seen on the season with 11 total touches against the Kansas City Chiefs including two rushing touchdowns, but Moreno still had 27 carries on the night. I think this outing makes Ball a must-add as a lottery ticket this late in the season. Moreno has had injury issues in the past and he hasn't handled this kind of workload in a very long time.

I'm not sure why I even bring him up as a disappointment anymore, but Trent Richardson once again stunk it up. He has shown zero vision and no explosiveness all season. I hope for his sake and for fantasy owners out there, that the Colts finally make Donald Brown the anointed rest of the season starter. Brown has been better week in and week out, and I'm sure Richardson is tired of the questions.

A.J. Green is on this list through no fault of his own. He just happened to be covered by "the current best cornerback in the NFL" Joe Haden. I knew Green was in for a touch match up, but 2 receptions for 7 yards. If you play in IDP leagues Joe Haden actually outscore A.J. Green by a huge margin as he had two tackles, two passes defensed, and two interceptions, one of which he returned for a touchdown.

Case Keenum was a huge disappointment, but it was really his coaches who disappointed me. Keenum has struggled with the blitz and it showed up on Sunday against the Raiders. Instead of sticking with the youngster the Texans pulled him and went back to Matt Schaub for the second half of the game. Schaub was very Schaub-esque in his relief duties and now it looks like Keenum will be back under center this week against the Jaguars.

Andre Ellington is my last disappointment for the week, I'm sure there are other deserving mentions, but Ellington is the guy that burned the most owners. Ellington touched the ball ten times for 13 yards. It's bad enough that Rashard Mendenhall is splitting carries with him, but not producing against the Jaguars is tough to swallow. 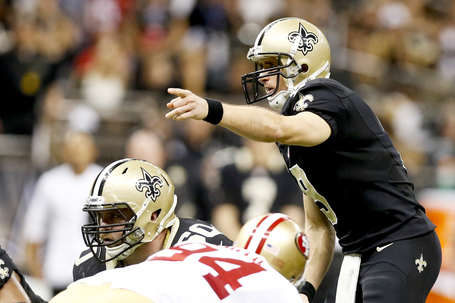 Usually I don't recommend starting quarterbacks and wide receivers on Thursday night, but this Thursday is different.

Drew Brees has a tremendous matchup against a battered Atlanta Falcons' defense and should put up huge numbers. The only question is who will be the beneficiary of all of Brees' passes. I think this could be a mirror image of the game against the Cowboys for Brees. He will pick apart the Falcons linebackers with his running backs and I look for Marques Colston to continue his semi-hot streak. I wasn't sure I could make Jimmy Graham my No. 1 tight end because of his injury, but then I came to my senses and put him in at the top. I am playing all of my Saints in this match up, especially Pierre Thomas, who has been a great PPR running back to this point.

Two of my favorite running backs this week are Andre Brown against the Dallas Cowboys and Eddie Lacy against the Minnesota Vikings. Brown in particular should have a very nice game against a banged up Dallas Cowboys defense. The Cowboys will be without Sean Lee at linebacker and have been piecing their defensive line together for weeks. If the Giants can involve Brown in the passing game it could be a huge day as the Cowboys have specifically had issues covering running backs. Lacy, on the other hand, faces a Minnesota run defense that was embarrassed by Marshawn Lynch last week. Lynch didn't have a monster yardage day, but did score three times. Lacy is a special runner. We may come to find out that he has his very own version of "beast mode" this Sunday. The more I watch Lacy the more I understand why SEC coaches were so glad when he left Alabama.

I'm going back to the well with Keenum. The matchup is too good to pass up against the Jacksonville Jaguars. The Jags let Carson Palmer throw for 419 yards and 2 TDs against them last week. If Palmer can handle the Jaguars rush then Keenum will be able to. If Keenum is too much of a gamble then you could go with the surprisingly consistent Mike Glennon. Glennon has been very steady since taking over as the starter in Tampa Bay and goes into Detroit on a two game winning streak. Detroit has been good against the run, but hasn't been able to cover anyone lately. So that makes Vincent Jackson a WR1 once again and puts Tim Wright and Tiquan Underwood on very deep league radars.

The Rashad Jennings show will once again be playing in Oakland. I don't know if we'll see anymore 80 yard touchdowns, but we should see RB1 production against the Tennessee Titans in Oakland. The Titans have been so easy to run on some experts actually thought about using Trent Richardson against them last week. While the experts were in the right ball park they were looking at the wrong player. Donald Brown was the beneficiary of the Titans' porous run defense instead of Richardson. This time it will be all Jennings as McFadden is set to miss another week.

I expect Colin Kaepernick and Frank Gore to run all over the Washington Redskins on Monday night. I think they could both be top five at their respective positions in fantasy scoring. The Redskins have struggled against Zone-read and there aren't many teams that do it better than the 49ers. Kaepernick along with Keapernick fantasy football owners need this to be the week he breaks out and I believe he will. 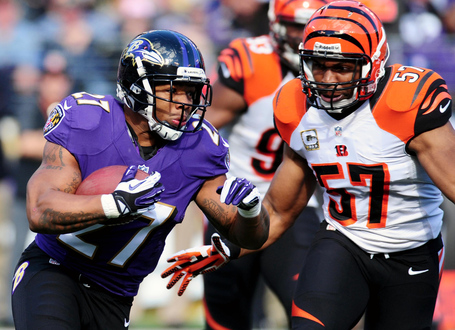 Other news and notes

Make sure you sell Ray Rice now! I'm sorry to say that he will not be facing the Chicago Bears again this season and should immediately be traded off of your teams wherever possible.

Washington Redksins' tight end Jordan Reed suffered a concussion early in the game against the Eagles and is playing on Monday night this week. Make sure you have a plan B in place. I would look to Fleener, Rob Housler, and Delani Walker in that order as injury replacements.

If Bobby Rainey somehow stayed on your waiver wire you need to make sure you grab him immediately. Rainey picked up where Mike James left off as he rushed through and around the Atlanta Falcons for a huge game. He touched the ball 32 times for 167 yards and 3 TDs.

With Matt McGloin under center for the Oakland Raiders Rod Streater finally had a decent fantasy game. Posting over 80 yards on 6 receptions and adding a touchdown. He could be a decent bye week fill in in deeper league, but the Titans corners are pretty good.

Adrian Peterson has been dealing with a groin issue and it could finally be time to pick up his hand cuff, Toby Gerhart. If the groin becomes more of an issue then at least you are covered and don't have to fight for him on the waiver wire if Peterson goes down.

Wide receiver Miles Austin is slated to return to the Dallas Cowboys' lineup this week, and while I didn't know how to feel about his return there are reports that he will gain his starting job back this week. This one is via Rotoworld.

Bryan Broaddus of the Cowboys' official website believes Miles Austin (hamstring) is "your guy" as the No. 2 receiver when he returns this week.

When asked if the Cowboys plan to ease Austin back in, Broaddus replied that it "doesn't appear that way." Speaking on Tuesday, Jerry Jones said Austin is ready to go after missing basically every game since pulling his hamstring in Week 3. Terrance Williams has struggled of late in the No. 2 role, so it sounds like Austin is going to take over. Williams will still see plenty of action in three-wide sets, with Austin moving to the slot. Cole Beasley and Dwayne Harris will be the Nos. 4 and 5 receivers. Austin has WR3 upside.

Feel free to ask me any start/sit or trade questions on Twitter @Coachesser or by messaging me on Facebook by liking Coachesser’s Playbook. You can also read my articles at www.coachesser.com and listen to the definitive fantasy football podcast on Itunes or Stitcher Radio by subscribing to the Trick Plays podcast hosted by Micah James (@FFMagicMan) and myself.