Breaking down the Giants' offense vs. the Cowboys' defense.

Share All sharing options for: Giants vs. Cowboys: When the Giants have the ball

Here at Big Blue View we usually do a Friday scouting report looking at the offensive, defensive and special teams match-ups for that weekend's upcoming games. Well, this week is a bit different. This week your New York Giants face the Dallas Cowboys on Sunday at MetLife Stadium in a death match critical NFL East game. Thus, we are expanding our usual repertoire.

This week, we will do separate posts on the offensive, defensive and special teams matchups. We begin today with a look at when the Giants have the ball.

[Coughlin: Giants 'wrapped it up and handed' first game to Dallas.]

The Giants scored 31 points in this game, but shot themselves in the foot -- and probably various other places -- with a half-dozen turnovers. There was the ominous first-play-of-the-season screen pass interception by Dallas defensive end Demarcus Ware on a ball intended for David Wilson. There was the game-deciding screen pass off the hands of Da'Rel Scott that turned a potential Giants' game-winning drive into a 49-yard Brandon Carr pick six that put Dallas ahead 36-24 with only 1:50 left. In-between there were two disastrous fumbles by Wilson, a muffed punt that hit Trumaine McBride while he was blocking and the first of what has been a half-dozen intercepted passes this season that were sent in Randle's direction.

The Giants' offense was obviously out of balance in terms of the run and the pass, something that continued right up until Brandon Jacobs' 22-carry, 106-yard performance vs. the Chicago Bears in Week 6.

The Giants are a different offensive team than they were in Week 1, particularly at the running back and offensive line positions. The Giants opened the season with Wilson and Scott at running back, and a not-ready-to-play Henry Hynoski trying to lead the way at fullback. They now have the power combo of Andre Brown and Brandon Jacobs in the backfield with John Conner, The Terminator, leading the way. On the offensive line, David Baas and Chris Snee, both on IR, have been replaced at center and guard by Jim Cordle and David Diehl. 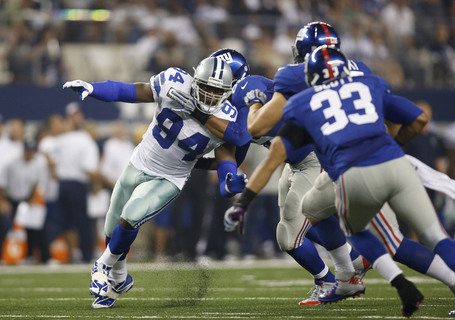 Will Beatty vs. Demarcus Ware. Ware has 13.5 sacks of Manning during his career, more than any other NFL player. He didn't get any of those Week 1, but he did dominate Beatty and make life miserable for the Giants. He had the interception, two hits on Manning and four hurries. Beatty has to do a better job if the Giants are going to give Manning an opportunity to make some plays down the field. Right tackle Justin Pugh may also see some of Ware, who moved over to the rookie's side several times in the first meeting between the teams.

Jason Hatcher vs. David Diehl. The Cowboys' defensive tackle was also a nightmare for the Giants in Week 1, manhandling a limited Chris Snee for a sack and five hurries. This week the job of slowing Hatcher, who did not play two weeks ago because of a stinger, falls to Diehl. He will likely get help, and he will almost certainly need it.

By the numbers the Cowboys have been one of the worst defenses in the league this season. They will come to MetLife Stadium Sunday without their leader, middle linebacker Sean Lee, who is out with a hamstring injury. The Cowboys are, however, looking forward to having their defensive front four of Ware, Hatcher, George Selvie and Nick Hayden together for the first time since Oct. 13.

There should be opportunities for the Giants to make plays against a Dallas secondary that has given up 50 plays of 20+ yards this season, tied for the most in the league with the Denver Broncos. Running the ball and protecting Manning from the Dallas front four are critical.

Turnovers will also be a deciding factor, as they almost always are. The Giants are -11 in turnover ratio this season and Manning, as we know, leads the league with 17 interceptions. The Giants' average a league-worst 1.8 turnovers per game. Dallas is +11 overall and averages 2.2 takeaways per game.