Five things I think I think about the Giants

Five things about the Giants heading into their Week 12 game with the Dallas Cowboys.

Share All sharing options for: Five things I think I think about the Giants

I borrowed this Peter King-style approach to talking about the New York Giants last week. I liked doing it, and it seemed well-received from within the community. So, let's keep on doing it.

Here are five things I think I think about the Giants this week as they prepare for a key game at MetLife Stadium against the Dallas Cowboys.

1. I think the Giants are a different team than they were Week 1. The Giants' team the Cowboys face on Sunday will be a much better team than the one Dallas beat in the season-opener. That doesn't mean the Giants are guaranteed to win, it just means they are better-equipped to do that. Offensively, the Giants are better at running back and along the offensive line. Defensively, Jon Beason and Will Hill have made a huge difference, and we now know that Terrell Thomas is still a quality NFL player. Jason Pierre-Paul is also much healthier than he was at the start of the season.

2. I think JPP needed that interception. All players, even great ones at the highest levels of their sports, can struggle with confidence. Pierre-Paul's game-altering pick six of Scott Tolzien Sunday was a great play that few defensive ends are athletic enough to make. For Pierre-Paul it should serve as a reminder of who he is and what he is capable of. If the Giants are lucky, it will lead to the vintage Pierre-Paul being unleashed over the final six weeks. 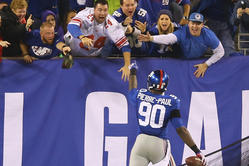 3. I think David Wilson is the wrong lead back for the Giants. The work done by Andre Brown, Brandon Jacobs and even Peyton Hillis over the past four games solidified in my mind something I have thought for a while. The Giants, with this coaching staff (which isn't going anywhere), want to be a mostly traditional, power-running football team. The offense has functioned better each week with Jacobs, Hillis and Brown able to churn out first downs and keep the Giants' offense on track. Plus, all three can pass block and both Brown and Hillis are pass-catching threats. Wilson is a speed back who might be better off in a read-option heavy offense. Wilson doesn't pass protect (notice I didn't say can't -- I said 'doesn't'.) He also hasn't proven he can catch the ball or run proper pass routes. I hope the young man comes back from his neck injury and has a good career, I just think there is mounting evidence that unless Wilson becomes better in-between the tackles, blocking and catching he isn't the right guy to build the running attack around in the future.

5. I think Jacquian Williams and Will Hill deserve more credit. Yes, I know some of you have been beating the drum for Hill in the comments. Hill has played extemely well in six games since returning from his suspension, replacing Ryan Mundy at one of the safety spots. Williams has pushed Spencer Paysinger back into a special teams role. Both Williams and Hill are faster and more athletic than the players they replaced, and while everyone points to the arrival of Jon Beason as the key to the defensive turnaround, the emergence of these two players deserves recognition.

Carolina's Luke Kuechly grabs Rob Gronkowski mid-way into the end zone, bear hugs him and ushers him pretty much all the way to the back line. Yes, the ball is intercepted short of the receiver but without the bear hug Gronkowski is at least in the area. Sure, the ball was uncatchable -- because Gronkowki was held and carried out of the play.

The nuances of so many NFL rules are absolutely ridiculous, and this is one. If you can call holding, illegal contact or anything else on a defender 40 yards away on the opposite side of where a ball ultimately gets thrown -- which happens all the time -- how can you allow an intended receiver to get completely mugged on the game-ending play and not call a penalty?

A no-call on that play is, in my mind, completely indefensible.