The Giants face the Green Bay Packers Sunday at MetLife Stadium in Week 11 of the 2013 NFL season. New York will be seeking its fourth straight victory. Here is how to watch the game, the TV channel, radio and online streaming information, odds, the schedule, game time, announcers, injuries and more.

Can the New York Giants do the as-yet impossible in the NFL? The Giants (3-6) host the Green Bay Packers (5-4) Sunday at MetLife Stadium as they continue their quest to become the first team in NFL history to make the playoffs after an 0-6 start.

"It’s one game at a time," Giants coach Tom Coughlin said. "Where are you, you’re right where you are.  Obviously you keep your dreams alive, but you focus on the task at hand. I hope that’s what we’re doing."

The Giants will find out Sunday. 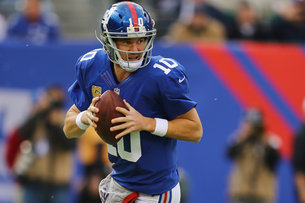 Our full week of Giants-Packers coverage.

Odds: The Giants are 6-points favorites.

[The holidays are coming. Get your Giants' gear!]

The Giants will be facing a Packer team starting third-stringer Scott Tolzien at quarterback [Related: Who is Scott Tolzien?]. The Giants may be without star defensive end Jason Pierre-Paul, who has a a shoulder injury. The Giants will try to contain Green Bay running back Eddie Lacy and make Tolzien air it out to beat them. On the offensive side, the Giants will hope to re-discover their penchant for big plays in the passing game.