Damontre Moore believes he is 'fully ready' to play

The rookie defensive end would likely see an increase in snaps should Jason Pierre-Paul not play Sunday vs. the Green Bay Packers.

Share All sharing options for: Damontre Moore believes he is 'fully ready' to play

With Jason Pierre-Paul questionable for Sunday's game against the Green Bay Packers up in the air, the New York Giants are considering all of their options to replace the star defensive end. One possible candidate for increased playing time is rookie Damontre Moore.

The rookie pass-rusher out of Texas A&M began the season on a low note, injuring his shoulder in the first preseason game and missing out on a significant learning period. But Moore has contributed on special teams, and Pierre-Paul's absence from the lineup has the rookie chomping at the bit to show off his skills. 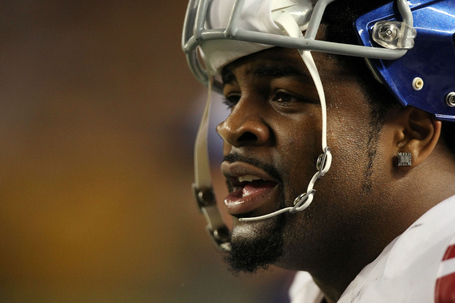 "We'll see when the time comes ... so I try not to pay too much attention to it, just go in there like I do every week and prepare and just work hard," Moore said Thursday. "I'm excited a little bit. What player wouldn't be naturally excited? At the same time, I just want to go out there and help the team and put them in the best situation, so if that's me out there, JPP if he's willing to go, it doesn't really matter."

Behind Pierre-Paul on the depth chart is Mathias Kiwanuka, who was slated to start at left defensive end when JPP was a question mark entering Week 1. But according to defensive coordinator Perry Fewell, Moore is definitely a candidate to see more snaps.

Moore would fill in on surefire pass-rush situations such as third downs and blitz packages, and Fewell would expect to see Moore make an impact when he sees the field.

"He would definitely be in the picture," he said. "We think he can get after a guy, and if we match him up on the right we think he has value that way in match-ups on the offensive tackles ... (The edge) is where his value comes in and he drops (back) pretty good, too. We did a lot of that with him early in camp, so he has a sense for dropping in coverage and can do some things that can enhance us from a pressure standpoint."

Asked what the biggest difference in his game is now compared to two months ago, Moore said his preparation. Whether it's picking the brains of veterans, breaking down film or listening to his coaches, Moore's game planning has seen the greatest improvement.

One uncertainty, however, is Moore's stamina. The rookie has averaged just a handful of snaps on defense this season, but he believes he's ready to handle up to 40 snaps at this point.

"I think I'm fully ready. I like taking on the challenge. I prepared hard, I'm confident in the scheme and the coaches have put me in the best position so far (that) I feel like I can go out there and make something happen," he said. "Any time is valuable time, so it's not so much to say if you get five snaps or 70 snaps; it's how you make us of that time. I go out there and play as hard as I can every play and leave it out there on the field."