Five moves that helped turn around the Giants' season

A look at five decisions the Giants, and GM Jerry Reese, made that have helped them improve following an 0-6 start.

Share All sharing options for: Five moves that helped turn around the Giants' season

When the New York Giants were bumbling their way to an 0-6 start this season lots of fingers were pointed at general manager Jerry Reese, the architect of the roster that couldn't win.

Reese deserved the heat, and still does, for decisions in the draft and free agency that look ill-advised. He also deserves some of the credit, however, for in-season moves that have helped the Giants bring hope to their season with three straight victories. Let's look at five of those moves.

Player after player credits Beason, acquired from the Carolina Panthers in a Week 5 trade for a seventh-round draft choice, for being the catalyst to the Giants' turnaround.

"Jon Beason has helped us out tremendously playing at that linebacker position and being the voice of the defense," said Antrel Rolle.

"He's definitely been a voice that has given us confidence in our defense with his leadership. Him being a two-time Pro Bowler, getting everybody lined up and just making plays out there too," Terrell Thomas said.

Beason is actually a three-time Pro Bowler and when the Giants acquired him no one knew what to expect. After three injury-plagued seasons no one knew whether Beason still had what it takes to make plays in the middle of an NFL defense.

He has shown the Giants he can still do that, and his leadership has been invaluable.

Reese can and should be criticized for possibly under-valuing the middle linebacker position the past few seasons, or at least not doing enough to deliver the Giants a strong middle linebacker sooner. He deserves credit, however, for rolling the dice on Beason.

Considering his troubled past, it likely raised some eyebrows a couple of seasons ago when the Giants took a flier on the disgraced former Florida safety. After two NFL suspensions in two seasons, no one could have blamed the Giants if they had cut ties with the 23-year-old Hill before this season began.

They did not, and Hill is rewarding them by playing outstanding football. In five games since returning from his latest suspension Hill has 29 tackles, an interception and a +5.4 rating from Pro Football Focus. He has taken a starting job away from veteran Ryan Mundy. 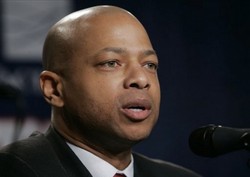 This move might end up back-firing in the long run, that remains to be seen. Keeping the free-agent-to-be wide receiver rather than dumping him for draft picks at the NFL Trade Deadline signaled to the Giants that the organization was not throwing in the towel on the 2013 season despite the awful 0-6 start.

Can the Giants keep Nicks long-term? Can Nicks play well enough the rest of the season to justify the big contract he will be seeking? Those are questions for another day, and if Nicks leaves we may view the decision not to trade him as a mistake. For the short-term, however, it was helpful.

The Giants dragged Hillis in off the street before a Week 7 game against the Minnesota Vikings, and the 'Ice Wagon' -- nicknamed such by Carl Banks -- helped drag the Giants to a pair of victories while holding the fort for Andre Brown. Hillis only averaged 2.8 yards per carry on those two games, but he lugged the ball a combined 38 times, allowing the Giants to at least maintain the threat of a running game. Going forward, Hillis gives the Giants a receiving threat out of the backfield.

When Brown went down to injury in the preseason, the Giants were left with an inexperienced group of backs who really had not yet figured out how to be NFL players. Bringing in Jacobs helped stabilize that situation, added leadership, toughness and a veteran presence. His hamstring and knee injuries have, unfortunately, prevented us from seeing if his 22-carry, 106-yard performance against the Chicago Bears was a mirage. Regardless, Jacobs' presence has helped the Giants.