New York Giants' special teams: Can they be fixed?

A look at the Giants' struggling special teams units.

Share All sharing options for: New York Giants' special teams: Can they be fixed?

The New York Giants' special teams have been a disaster this season. If you can think of something that can go wrong, it pretty much has gone wrong in the kicking game.

The punt team has surrendered four touchdowns -- three of those on returns of more than 80 yards, one on quite possibly the worst long snap you will ever see in your life. Punter Steve Weatherford is having an inconsistent season. The Giants have suffered from turnovers, poor decision-making and generally futile efforts in both the kickoff and punt return game. The kickoff coverage has broken down at times. Chip-shot field goals have been missed.

Just about the only thing the Giants have not done is give up a kickoff return for a touchdown.

Here are some of the woeful numbers:

A week ago, special teams coordinator Tom Quinn said he thought his groups were "starting to come around." Then, vs. the Oakland Raiders Weatherford had a horrible day. Jerrel Jernigan fumbled the opening kickoff, the Giants gave up two long kickoff returns and Rueben Randle made a couple of poor decisions in terms of fielding or not fielding punts. The only saving grace was the punt that Damontre Moore blocked, which turned into a Cooper Taylor touchdown.

What can the Giants do over the next seven games to fix the special teams play? Special teams coordinator Tom Quinn is not getting fired right now, which I know is the solution many would recommend. If this continues you have to think Quinn's job would be in jeopardy at season's end, but it seems unlikely that would happen during the season. With that in mind let's look at a few areas that need improvement.

What is going on with the Giants' punter? Weatherford is one of the most popular, media-friendly Giants and -- to be forthright -- easily the Giants' player I enjoy talking to the most. Fact is, though, Weatherford's inconsistency this season has been difficult to explain.

I don't know what has happened to Weatherford, a brilliant directional kicker who set career highs is yards per punt in each of his first two seasons in New York. I know that the very first punt I saw Weatherford hit in training camp was a horrid shank, and he hasn't seemed to find his groove since.

Coach Tom Coughlin was obviously displeased with the veteran punter following Sunday's effort, three poor punts in the windy conditions at MetLife Stadium and a fourth that was partially blocked.

"We didn’t punt the ball at all. There’s not one punt there that I … We did get a nice roll at one time, but that was something that we’ve got to address," Coughlin said.

Coughlin was asked if the Giants would bring in any punters this week when they work out players, which usually happens on Tuesdays. He said "not necessarily."

There are several free-agent punters available, including Zoltan Mesko (formerly with Patriots, Steelers) and Chris Kluwe (Vikings). The Giants recently worked out punter Brad Wing, a rookie who was cut by the Eagles.

It seems highly unlikely the Giants would seriously consider replacing Weatherford, a veteran with a track record of success. After all, they stuck with rookie Matt Dodge for a full season in 2010. We know what happened, and we know that decision ultimately may have been the one that cost them a playoff berth, but if they stuck with Dodge they will stick with Weatherford.

All the Giants can really do here is hope that Weatherford finds his stroke again. 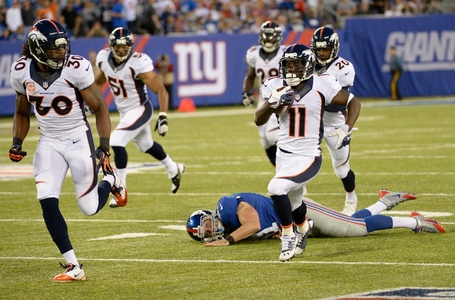 Trindon Holliday returns a punt for a touchdown against the Giants. [Robert Deutsch-USA TODAY Sports]

Coughlin has been particularly distressed by the punt team, saying "We’ve had too many situations with that team this year that bother me."

The punt coverage, obviously, would be helped if Weatherford was hitting the ball more consistently. Back in the Dodge days the Giants learned the hard way that it is impossible to cover punts well when you don't know where the ball is going. Thing is, even when Weatherford has punted beautifully this season the Giants have still been unable to cover.

The kickoff coverage has, at least, not given up any touchdowns. That, however, doesn't mean it's been good.

The biggest problem with both units seems to be assignment breakdowns -- players not staying in their lanes or sticking to their assignments.

Bad special teams play is usually a sign that you are a bad team that doesn't have NFL quality depth. I would argue with the Giants that that should not be the case. Zak DeOssie, Spencer Paysinger, Mark Herzlich, Will Hill and Ryan Mundy, among others, are all players who have excelled in coverage during their careers. Moore and reserve linebacker Allen Bradford are guys who can make plays.

The problem over the next seven games is that the Giants can't really change the personnel. The roster isn't going to change at all unless injuries push more players to injured reserve.It's too late to change the schemes. Besides, are punt and kickoff coverage schemes all that complicated? Run down the field, stay in your lane, get off a block, make a tackle. Am I missing something here?

Coughlin complimented the way Rueben Randle handled the ball in the wind Sunday, saying "I’m taking my hat off to him with the wind the way it was with the way he was able to catch the ball and take care of the football."

Thing is, Randle also had two poor judgments on Sunday. He caught a ball at the 3-yard line -- while backpedaling -- that he should have let go into the end zone. Later, he let a ball bounce around the 5-yard line that wound up being downed at the 1.

Randle is far from an explosive return man. He averages 7.0 yards per return, and only four players who have returned at least 10 punts average less. His best asset as a return man is that he catches the ball well and secures it.

The Giants have few options to replace Randle. Charles James is untested. Jerrel Jernigan has never proven he can catch the ball consistently. Jayron Hosley might be more explosive than Randle, but he hasn't been healthy all season.

It's a safe bet the Giants will live with Randle the rest of the season.

David Wilson is on IR, leaving the Giants without their best return man. Jernigan has at times in the past done a good job in the kickoff return role. Will he stay in that role after Sunday's awful game-opening fumble. "We'll see," said Coughlin. Read that any way you want. My guess? "We'll see" probably means "are you kidding me? Of course not."

Problem is, who can the Giants replace Jernigan with?

Rookie running back Michael Cox is an option. He returned two kickoffs earlier this season, averaging 19.5 yards. James returned a half-dozen kickoffs last season at Charleston Southern. On the current roster there really aren't any other realistic options.