A look at the most important plays in the Giants victory over the Raiders on Sunday.

It might not be the most impressive three-game win streak in recent memory, but three wins is three wins. The New York Giants took care of the Oakland Raiders at home with a 24-20 victory on Sunday in a game that they tried very hard, but failed to give away. The Giants are still, miraculously, in the playoff hunt in the NFC East and get to take on an Aaron Rodgers-less Green Bay Packers this upcoming Sunday -- a game where a victory would put them one game behind the Dallas Cowboys when they meet up in two weeks. Let's take a look at the five biggest plays that decided the game.

Although I could say the biggest key play was activating Andre Brown. 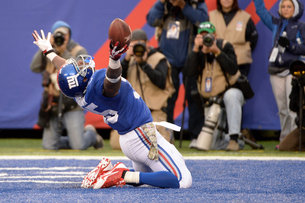 Complete coverage of the giants' victory over the Oakland Raiders.

The special teams are awful all the way around. Josh Brown has missed easy field goals, Steve Weatherford has struggled to punt the ball consistently long all year, the kick return game is not much of a threat without David Wilson, the coverage teams have given up way too many big returns, the punt return team is among the worst in the league every year. But there is one bright spot, Damontre Moore. Hopefully one day this kid will be a major player on the defensive line, but for now Giants fans will have to settle for him being a force on special teams -- even as a gunner at times. On the opening kickoff Moore made the tackle that saved the touchdown off Jerrel Jernigan's fumble and then here he created points for the Giants off the punt block, which is the first time in a very long time (if I can remember the graphic correctly first time in 408 games and I think 1988).

Rueben Randle catches a 5-yard fade for a touchdown

Rueben Randle makes a catch that Hakeem Nicks had made a living on over the past couple of years and what Randle will need to perfect if he's going to replace Nicks moving forward. Randle showed good field awareness getting both feet in. Randle now leads the team in touchdown receptions with 5, and has 423 yards receiving, which are solid numbers for a number three receiver. The only No.  WR who has clearly better numbers would be the No. 3 receiver of the Broncos (is it Welker or Decker?).

The return of Terrell Thomas and the emergence of Trumaine McBride has given the Giants enough confidence in their cornerback group this year that they have moved Antrel Rolle to safety nearly full time as opposed to a pseudo safety/nickel cornerback/extra linebacker. And he has responded by making plays week in and week out -- he has two sacks and three interceptions this year to go along with 53 tackles and 6 passes defensed. Those are all (not the tackles) highs for him as a New York Giant.

Terrell Thomas picks off Terrelle Pryor and nearly returns it for a touchdown (and nearly fumbles it out of bounds for a touchback).

The Giants secondary is big plays this year while also not giving up big plays every week. Since Perry Fewell has become coordinator the Giants secondary has made a lot of big plays, but unfortunately they have also allowed a lot of huge plays (it seemed like Corey Webster was a major contributor to that). This year the Giants have only given up 25 plays of 20 or more yards through the air (sounds like a lot, but it's the seventh-fewest in the league). Last year they gave up 60 (fourth-worst in the league).  This is even more impressive when you factor in the Giants inability to rush the quarterback.

Mathias Kiwanuka forces a Pryor fumble that is recovered by the Giants.

There was 3:28 left in the game with the Raiders only trailing by four points on a third-and-10. Pryor dropped back where he was met by Mathias Kiwanuka who forced a fumble that was recovered by Cullen Jenkins. The Giants were then able to use their new-found running game to run the clock out and secure the victory.

Things still look bleak for the Giants, but the thing that I like about this year is so far this is a team with resiliency. They are just bad on the offensive line, and Eli Manning is playing shell-shocked (bailing out too early on throws, missing throws he has made many, many times in the past), but they have heart. They started 0-6 and have won three in a row. You can only ask that your favorite team plays hard like they care as much as you do as a fan and it's clear these Giants want to succeed. Hopefully that will lead to big things either this year (seems unlikely) or moving forward into next season.