Cornerbacks coach Peter Giunta spoke about the team's improved secondary. Here is some of what he had to say.

In 2012 the New York Giants surrendered 73 passing plays of 20 yards or more, 13 of those going for at least 40 yards. Thru eight games this season the Giants have allowed only 26 such plays, including only two of more than 40 yards.

"Communication has been very, very good this year. We put a big emphasis on it last year, to make sure that we’re all on the same page and everybody’s playing the same coverage and everybody knows exactly what the other guy is doing," cornerbacks coach Peter Giunta said this week. "Those guys have done a great job of communicating this year. They know when they’re supposed to stay on top of the route, when they can be aggressive and undercut routes and the safeties have done a great job in staying on top and helping us."

Giunta also discussed the play of the individual cornerbacks.

Terrell Thomas has been "very inspirational" to the Giants this season, Giunta said. Thomas had his best game last Sunday with 11 tackles, and a strip sack.

"You miss two years and every week you start to get a little bit better. Mentally and emotionally getting over that, "Can I do it?"… now it’s like, "Hey, my knee is fine. I can do this." You talk to anybody that’s been hurt, it’s very hard. As much as you say, "Yeah, I’m not worried about it," it’s hard to get over that," Giunta said.

Prince Amukamara, in his third season, has developed into a quality player.

"The big thing was that this year was the first time that he was able to go through all the OTAs, all of minicamp, all of training camp and everything without any setbacks injury-wise and that’s a huge plus for a young player," Giunta said. "Every game he is getting better and better."

Giunta has been pleased with Amukamara's aggressiveness.

"He’s getting his hands on people, being very competitive and challenging throws on guys," Giunta said. "He understands what people are trying to do to him. His awareness and anticipation of things that are about to happen are so much better because he got to play a little bit last year and now he's played eight straight." 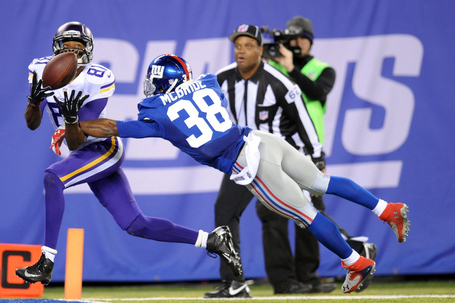 With Corey Webster having played in only three games, Jayron Hosley hurt most of the season and Aaron Ross on IR, Trumaine McBride has stepped into a prominent role opposite Amukamara. McBride, a six-year veteran signed as a free agent during the off-season, has started three games. Quarterbacks are completing only 46.2 percent of passes thrown in his direction, and McBride has a passer rating against of just 65.5.

"Trumaine has done a great job," Giunta said. "He does a great job getting up and pressing guys. It fits his skill set and he's able to go up and match their quickness. He's a little undersized but he competes, he's a great competitor, he has good ball skills, especially with the ball in front of him. So he's been a great surprise for us this year. He is a guy with very, very good coverage skills. In our system he fits because we do play a lot of man-to-man coverage. That's perfect for us."