Injuries have forced the New York Giants to play a different combination of offensive linemen nearly every week this season. The impact on the offense has been obvious, with 14 sacks surrendered in the first five games (18 overall) and a per carry average of only 3.2 yards when rushing, 30th in the league.

Long-time offensive line coach Pat Flaherty admits that this has been a challenging season for his group.

"We’ve always approached it in our offensive linemen room that you have to get ready. The reason that you’re on this team is this New York Giants organization signs you to a contract to play. There’s no red-shirt in the NFL so if you’re going to be here, my job as a coach is to get them ready to play, no matter who we’re playing at what time because you never know," Flaherty said. "Now, do you have challenges with that? Sure because they haven’t been executing your offense through that week but it’s their job and it’s my job to make sure they prepare."

The Giants' offensive line ranks 30th in the league in run-blocking and 19th in overall pass protection, according to offensive line stats from Football Outsiders. 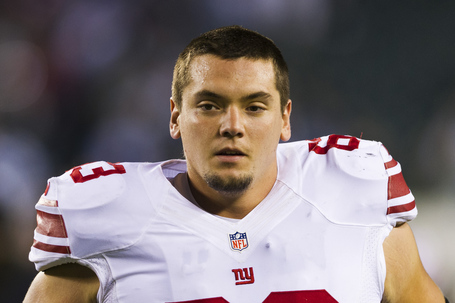 The line has begun to settle down in recent weeks, however. Jim Cordle has started at center in four of the past five games, and played nearly all of that fifth game, in place of David Baas. David Diehl has now started four straight games at right guard, at least allowing the Giants to maintain some continuity up front.

Flaherty was also asked to assess the performance of rookie right tackle, whom NFL analyst Ross Tucker recently said is playing better than any of the other offensive linemen drafted in the first round of the 2013 NFL Draft.

"Justin’s progressing along fairly well. In the last few weeks I’ve seen his technique and fundamentals become better. In the beginning, with learning the offense, one, and then learning the techniques that you need to protect in the pass protection, some things were very challenging to him because he was playing against some savvy veterans there in the beginning of the season but in the last couple of weeks he’s settled down," Flaherty said. "The game is slowing down for him, I think it’s still fast. When you’re going into your ninth game it should slow down for you as a rookie but he’s still a rookie so he’s going to learn each and every game."