Breaking down the three interceptions by Eli Manning Sunday vs. Philadelphia.

Share All sharing options for: Examining Eli Manning's interceptions vs. the Eagles

New York Giants' quarterback Eli Manning is getting killed by former NFL quarterbacks for his poor play this season. Giants' head coach Tom Coughlin says Manning is trying to do too much.

For his part, despite the league-worst 12 interceptions, 16 total turnovers and an awful 65.8 passer rating, Manning says he doesn't believe he's playing badly.

"I don't feel like I'm throwing the ball up for grabs, or just throwing it into double coverage, or just making bad reads and terrible decisions," Manning said during his weekly appearance on WFAN with Mike Francesa. I don't think I'm playing lousy. I think I'm seeing the defenses well. I think I'm throwing the ball accurately. So I feel like I'm in sync, my fundamentals are good, everything's kind of in place. It's just a matter of getting in some bad predicaments and not catching many breaks and just getting in some tough spots."

Let's look at all three of Manning's Sunday interceptions and see if we can figure out what happened.

The situation: There is 10:49 left in the fourth quarter and the Giants face first-and-20 at their 41-yard line following a Kevin Boothe penalty. They trail, 22-21.

Manning drops back, gets rushed as a blitzer comes around the edge, may or may not have been hit in the head as he releases the ball for an open Brandon Jacobs with the pocket collapsing. Whether the ball is batted by a Philadelphia Eagles' defender or hits a Giants' lineman in the helmet is unclear. It caroms into the air and Philly's Mychal Kendricks picks it off. 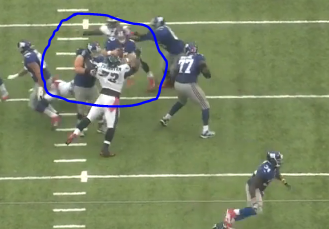 Manning terms this an "unfortunate play" and I have to agree. Maybe you can argue he should just take the sack here, but I can't find a lot of fault with the quarterback on this play.

Manning is flushed out of the pocket. With an Eagles' defender draped on him he sees Victor Cruz breaking free across the middle. He knows, as he said later, that if he can get enough on this throw even with the duress he is under that Cruz can make this play.

Unfortunately, he can't get much on the ball. After watching this play several times, both Manning and Cruz have to share blame. Manning should probably have thrown this ball into the ground at Cruz's feet. Cruz, however, runs straight across the 38-yard line from hashmark to hashmark, never coming back for the ball. That gave Philly's Brandon Boykin the opportunity to undercut Cruz and wrestle the ball away. A better effort from the wide receiver and this throw is nothing worse than an incompletion. The photos below don't truly show you what Cruz did on the route, but he did not help his quarterback here.

Manning credited Boykin with an "outstanding play." This wasn't the best judgment by Manning. From an early age, however, you teach athletes to come back and get the ball when it is thrown to them. In this case Cruz did not do that and it cost the Giants an interception.

Here, Manning tries to hit Hakeem Nicks on a quick slant. This is a timing pattern that has to be thrown on time with the quarterback trusting that the receiver will get to the spot. Unfortunately, for reasons known only to him, Nicks simply stops running as the ball is thrown. Cary Williams of the Eagles doesn't, and intercepts the pass.

This, to me, is one of those interceptions that goes on Manning's record where he had no fault whatsoever. The ball was thrown on time and delivered where it was supposed to go. The receiver simply did not do his job.

On WFAN, Francesa baited Manning, saying he thought this pick was "clearly" on the receiver and that Nicks "quit" on the route. Francesa is correct on both counts. Manning, who almost always takes the heat, didn't exactly defend Nicks, saying it was "just a bad play."

Manning came out of the game Sunday with an awful three-interception stat line, and sitting in the stadium this looked like poor quarterback play. Watching the film, however, you see a different story. Of the three interceptions only one, the second, involves any questionable judgment by the quarterback. In his defense, it was third down and there was an opportunity for a drive-sustaining play. Cruz has to make a better play on that ball.

In all, the results were catastrophic for the Giants. After the game Sunday I called the performance "a complete Manning meltdown." In retrospect, I think the truth is his teammates didn't give him much help.