What can the Giants do? Here are five suggestions

Are there any lineup changes the 0-5 Giants can make that might help them? Here are five ideas.

Share All sharing options for: What can the Giants do? Here are five suggestions

The 0-5 New York Giants have no time to sulk in the mess they have made for themselves. They have to get right back up on their broken-down horse and play another game Thursday night, this one at Soldier Field against the Chicago Bears.

Is there anything the Giants can do to begin changing their fortunes? Well, yes they explain to Eli Manning that the ball is supposed to be thrown to the guys wearing the same color jersey he has on. They can also explain the intentional grounding rules to him.

Other than explaining the fundamentals to Manning, though, what can the Giants do to try to make something -- anything -- out of this thus-far wretched season? Here are some ideas. 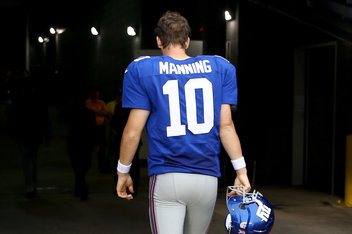 Reviewing Giants-Eagles in our traditional style.

What They Can Do

Let's acknowledge first and foremost that this is a short week during which the Giants will barely practice. They can't overhaul everything. Here, however are a few suggested modifications. None of these are going to suddenly morph the Giants into a powerhouse, but they are all worth a shot.

Get John Conner on the field -- The Giants can't run (56.8 yards per game, last in the league) and among the myriad of issues they have is that Bear Pascoe really can't lead block as a fullback. Conner, just two seasons ago, was one of the best lead-blocking fullbacks in the business. I know he probably doesn't know the whole playbook yet, but how complicated can it be to line up, plow into the line of scrimmage and hit the first defender you see? Conner is only 26, get him on the field and see if he can help now and in the future.

Bag the Brandon Myers experiment -- Myers caught 79 passes for the Oakland Raiders last season and we have seen why. The Raiders were bad and no defense cares about late-game dump off passes when they are way ahead. Myers can't block and he isn't a real factor in the Giants' passing attack, no matter what his number of catches is. Give his snaps to Larry Donnell and, if he can ever get healthy, Adrien Robinson. At the very least get Myers off the field in blocking situations and use an extra lineman as a blocking tight end.

Get James Brewer and Brandon Mosley into the lineup -- I really don't know if these two players can help the horrid offensive line long term. I do know that Kevin Boothe, David Diehl and Jim Cordle can't. With the short week maybe getting these two into the lineup isn't realistic. Eventually, though, they have to play.

Get Damontre Moore more snaps -- Mathias Kiwanuka and Justin Tuck are trying, but the reality is neither of them has much left to give. Moore, the one player the Giants have who might be able to make a difference with their pass rush, on the field and start getting a look at the future of your defense. Moore, of course, has to get healthy first. He missed time earlier with a shoulder injury and now apparently has a hamstring issue, which is why he only played five snaps against the Eagles. If his hamstring allows get him 30 or more snaps.

Play Jon Beason -- I have no idea if Beason has enough left to help the Giants -- short- or long-term. The Giants traded for the guy, though, so let's start finding out. Everybody loves the guy, but I think we've seen enough Mark Herzlich to know he isn't a long-term fixture in the Giants' plans. When the Giants use a middle linebacker let it be Beason. That way at least they find out if they need to go get one in the offseason.

What The Giants Can't Do

They can't fire everybody, especially not on a short week. It isn't the Giants style to make mid-season changes like that, anyway. Head coach Tom Coughlin has already made clear that isn't happening. If they were going to make any major changes they would make them in the 11-day gap between Thursday's game against the Bears and their Monday night game against the Minnesota Vikings, or in their by week after the October 27 game against the Eagles.