Follow our Giants-Eagles hub page for everything you need to know leading up to Sunday's game.

The Giants could be missing three of the four defensive tackles in their regular rotation on Sunday. They will be missing a pair of cornerbacks, possibly three. They will be facing a high-powered Philadelphia Eagles' offense that is second in the league in yards per game at 458.8.

Yet I can't imagine this team starting the season 0-5. Somehow, some way I believe this team will find a way to win against the Eagles on Sunday. I don't know how because there is nothing -- outside of throwing the ball to Victor Cruz -- that the Giants do well.

'I'm hoping that our fans are as boisterous and supportive as they've ever been, maybe even more.' - Tom Coughlin

I don't think anybody really saw this coming, but the 2013 Giants look like a bad football team. Other than Cruz, and perhaps Manning, Jason Pierre-Paul and Prince Amukamara, they have no players in their primes. Even out of that group, only Cruz and Amukamara are truly playing well. They have a collection of proud veterans who aren't what they used to be and young players who have yet to show they can play winning football at the NFL level.

The Giants should be able to get their struggling offense untracked against an Eagles' defense giving up more yardage than any other team in the league. The problem is how do the Giants, last in the league in points allowed and entering the game with a wounded defense, slow the Eagles' offense? 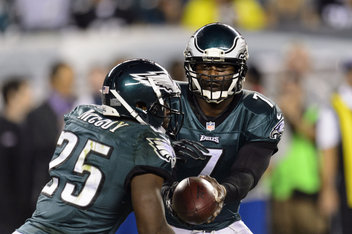 Breaking down the match-ups for Sunday's game.

More than anything else I am interested in the vibe at MetLife Stadium on Sunday. Coach Tom Coughlin and safety Antrel Rolle have both begged for help from the home crowd on Sunday.

"I'm hoping that our fans are as boisterous and supportive as they've ever been, maybe even more," Coughlin said. "I just hope everyone rallies around our team right now. The players need it, we all need it, we all need to feel that great support and the 12th man, playing at home in the division, there's certainly every reason in the world to be excited about that. A 1 o'clock game, I'm hoping that they help us, that the fans help us win."

It will be interesting to see if this is a crowd that is excited and supportive from the beginning, or one that seems wary and waits to see what happens.

If the Giants lose, especially if they lose big, it will be ugly at MetLife Sunday, and probably the rest of the season.

As I said earlier, though, I think the Giants keep the wolves at bay for the time being by coming out of Sunday's game with a victory.