Fire Kevin Gilbride? There is a case to be made for that, and here it is.

The great Kevin Gilbride debate drew a robust 350 comments, stirring up the 'Fire Gilbride' faction as I knew it would. Some of the comments were great, some insightful, some well thought out, some hilarious. Others, and I think we all knew this would happen, were just plain hateful and didn't add anything to the discussion.

One thing I am amazed at, though. I left those of you in the 'Fire Gilbride' camp an opening large enough to drive an 18-wheel truck through -- or in this case large enough to drive a stake through the heart of Gilbride's work as offensive coordinator with the Giants. I went back through the comments a couple of times to be sure and, to my amazement, no one picked up on the opening I gave you.

There is a great argument to be made as to why Gilbride's time as Giants' offensive coordinator might have run its course, why the Giants might be better served in the long run by someone with fresh ideas or a fresh perspective. I will hand you the 'why Gilbride could be fired' argument on a silver platter. 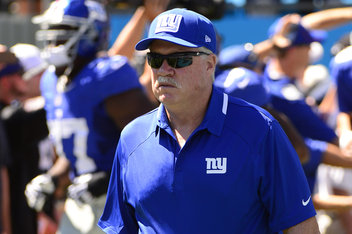 Just in case you somehow missed it the first time.

It has nothing to do with play calls, in-game adjustments, blocking schemes, running behind tight ends who aren't good blockers, the shotgun draw, throwing too many deep passes, throwing too many short passes, not playing David Wilson enough snaps or any of those types of things.

Here is what I wrote:

Can you make an argument that perhaps Manning's comfort in Gilbride's system, long considered an asset, has made him a bit lackadaisical? Probably an anecdotal one, but it's an argument you can make. Perhaps a change would do Manning good, if only because maybe he is too comfortable.

Yes, the argument for ousting Gilbride has nothing to do with all of those peripheral issues. If you are going to oust Gilbride the reason for doing so has EVERYTHING to do with only one thing. The play of Eli Manning.

Manning has two Super Bowl rings, and two well-deserved Super Bowl MVP trophies. He will easily go down as the best and most prolific Giants' quarterback of all time. He might be a Hall of Famer. When he's right, there aren't a half-dozen quarterbacks in the game who are better than Manning.

That, right there, is the rub. Manning has not been right for most of the past two years. Cutting right to the heart of the matter if the offensive coordinator can't get his franchise quarterback to play like a franchise quarterback -- if he spends the better part of two straight seasons looking like a sloppy, mistake-prone young quarterback who hasn't yet truly learned his craft -- then THAT is why you consider making a change.

'If the Giants believe another offensive coordinator would have more success in taming Manning's wild, erratic side that's why you make a change.'

Look no farther than the San Diego Chargers for a perfect example of what a change can do for a quarterback.

Philip Rivers, drafted by the Giants and traded for Manning way back in 2004, has long been among the league's elite quarterbacks. The last two seasons, however, Rivers regressed. He threw 35 interceptions over those two seasons and saw his passer rating plummet from above 100 three straight seasons to in the high 80s in 2011 and 2012.

This season, with a new coordinator (Ken Whisenhunt) and yes, a new head coach (Mike McCoy) Rivers is playing the best football of his career. He has 11 touchdown passes, only two interceptions, is completing an astounding 73.9 percent of his passes and has a quarterback rating of 118.8, well above his 105.5 career best (2008).

Why can't Manning put up those types of gaudy numbers? Rivers is not better than Manning. When he's right the only quarterbacks you automatically put above Eli on the quarterback totem pole are Peyton Manning, Tom Brady, Aaron Rodgers and Drew Brees. Argue about how you arrange the rest all you want, that's not the point. Eli is in the conversation after those four, that's the point.

Since the 2011 Super Bowl he has not produced like a quarterback who belongs in that conversation.

Follow our Giants-Eagles hub page for everything you need to know leading up to Sunday's game.

We have talked a lot about the failings of the Giants' offensive line this season, and that is undoubtedly hurting Manning. The lack of a consistent running game, the fact that the Giants' 12 dropped passes are second in the league and the fact that they have spent much of the season trailing -- by a lot -- have all contributed to some of Manning's poor play.

The reaility is, though, Manning has to be held accountable for some of his poor decisions. The first play of the season screen that was intercepted. The throw to Hakeem Nicks in the end zone right before halftime that cost the Giants points. Going back to last season, the inexplicable throw to a covered Ramses Barden in a game against the Philadelphia Eagles that knocked the Giants out of field-goal range and -- ultimately -- is probably the single play that kept them out of the playoffs.

What I wonder is this. Who is coaching Manning? Yes, I know Gilbride is the offensive coordinator and Sean Ryan the quarterbacks coach. You never see or hear any real evidence, though, that anyone is calling Manning out or really holding him accountable for his mistakes.

In 52 games beginning in 2010 Manning has thrown 65 interceptions and fumbled 23 times, losing 17. That means Manning is responsible for a staggering 82 turnovers in those 52 games. All of them, obviously, are not his fault. The number is still way too high.

Here are a couple of other quarterbacks during that 2010 to the present time period:

We have heard head coach Tom Coughlin use the phrase "careless disregard for the ball" in the past. For years we have heard Manning talk about being smarter with the ball. Yet, it doesn't seem to happen. Manning has never played a full season during which he has thrown single-digit interceptions.

With his pedigree, and the success that he has had, you know he knows some of the decisions he makes aren't smart ones.

Can Gilbride get Manning to be more careful? Gilbride and Manning have been together since the quarterback entered the NFL. If Gilbride could have tamed the Brett Favre gunslinger in Manning he would have done it by now.

If the Giants believe another offensive coordinator would have more success in taming Manning's wild, erratic side that's why you make a change. It's also a reason I could support. Because the Giants won't be what they should be until Manning start playing consistently like the quarterback he is supposed to be.

Here is the breakdown of all commenters who weighed in on the Gilbride debate.