Reviewing Sunday's victory by the Giants with our regular 'Kudos & Wet Willies.'

There were lots of good vibes from the New York Giants on Sunday following their 15-7 victory over the Philadelphia Eagles. Our traditional 'Kudos & Wet Willies' review reflects the good feelings with a lengthy list of 'Kudos.' Let's get started. 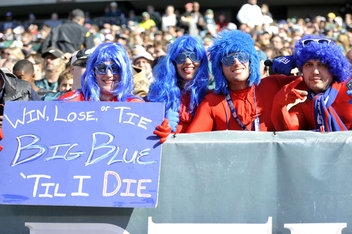 Complete coverage of the Giants' victory over Philadelphia.

Terrell Thomas: Thomas put the exclamation point on his comeback from three ACL tears with 11 tackles, a critical strip sack of Eagles' QB Matt Barkley at the end of the first half and a pass defensed. Thomas also played all 61 defensive snaps. Trumaine McBride also did a good job Sunday, as he has the past several weeks. Thomas and McBride have to continue to play -- both are better than Corey Webster at this point, even if Webster is fully healthy.

Giants' Defense: A week after holding Adrian Peterson to 28 yards on 13 carries the Giants held LeSean McCoy to 48 yards on 15 attempts. Defensive end Justin Tuck had two tackles for loss, but the work by the Giants was a total team effort. The defense, in fact, deserves 'Kudos' as a whole after not allowing a point for two straight weeks. They also got a season-high four sacks.

Perry Fewell: Both Tuck and Antrel Rolle credited Fewell with listening to the players and simplifying some of the things the Giants were doing in the pass rush, which generated four sacks Sunday. The Giants generated those four sacks while, according to Pro Football Focus, blitzing only eight times in 61 snaps. There were also personnel changes we will delve into in more detail later, but Spencer Paysinger and Ryan Mundy received no defensive snaps, while Thomas, Will Hill and Jacquian Williams played every snap.

Antrel Rolle: Aside from an admittedly bone-headed penalty for excessive celebration following an interception, Rolle was outstanding on Sunday. He had a sack, an interception, recovered an onside kick near the end of the game and played with passion.

Will Hill: In the hysteria over the emergence of middle linebacker Jon Beason as a defensive leader, Hill's contribution has gone somewhat unnoticed. Hill played every snap Sunday in place of Ryan Mundy and had five tackles, a game-sealing interception and a pass defensed. Hill, who missed the first four games due to an NFL-imposed suspension, along with Beason, Williams and Thomas adds tremendous athleticism to the defense.

Linval Joseph: After missing the first Eagles' game Joseph was a force Sunday vs. both the run and the pass. The Giants really do have an embarrassment of riches at the defensive tackle position, and Joseph is the best of the bunch.

Eli Manning: His 25-of-39, 246-yard performance wasn't spectacular. It was clean, however, with no turnovers for the second straight game. Credit Manning and offensive coordinator Kevin Gilbride for recognizing how well the team's defense is playing and adjusting to a safer passing attack that isn't forcing so many dangerous throws down the field. Manning become the Giants' all-time leader in passing yardage Sunday, passing Phil Simms.

Peyton Hillis: For the second straight week Hillis was huge for the Giants. He carried 20 times for 70 yards, caught three passes and was excellent in pass protection. Hillis is earning himself a role in the Giants' backfield no matter whether Andre Brown, Brandon Jacobs and Andre Brown return.

Hakeem Nicks: Seven catches for 57 yards. He answered his critics by showing Sunday he is still a force.

Victor Cruz: Seven catches for 86 yards. He also survived a vicious body-slam tackle that should have been penalized.

Steve Weatherford: Remember those first few games when Weatherford was struggling to punt the ball with any accuracy at all? Not anymore. Weatherford punted five times Sunday, pinning the Eagles inside the 20-yard line three times. His best was a career-long 68-yarder that rolled out of bounds at the Philadelphia 3-yard line. Of course, Weatherford needed a trampoline -- or maybe a crane -- to handle that errant Zak DeOssie snap. And his kick the ball away after a bad snap technique needs a little work, but he had a great day. 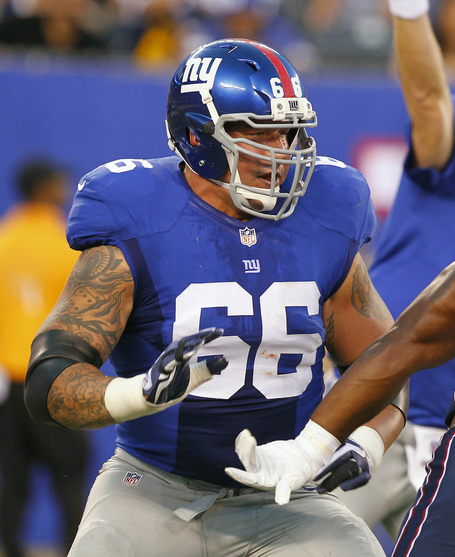 Larry Donnell: The young tight end was wide open in the end zone on a play in the first half and caught what should have been a touchdown pass from Manning. Only Donnell was several yards out of bounds. Maybe tight ends coach Mike Pope needs to explain to Donnell how big the field is.

David Diehl: It always seems to come to this. No matter how good things go for the Giants we can find a reason to pick on the veteran offensive lineman. It's a wonder the Giants ran the ball successfully at all considering that Diehl compiled an unbelievably awful -8.3 run-blocking grade Sunday (-8.4 overall). PFF's Sam Monson said the Giants "are now running out of positions to try him in the hope that he is any less poor at any of them having played his way out of LT and RT."

Zak DeOssie: That fourth-quarter snap over Weatherford's head was easily the worst of his career. I didn't think it was possible to snap a ball that far over a punter's head. In a multi-story building that snap would have landed on the second floor. DeOssie also added the first illegal snap penalty I can recall ever seeing.