Did the New York Giants; 15-7 victory over the Philadelphia Eagles really put them back in the playoff hunt? Well, that depends on who you ask.

The Giants believe they are. The math says they are only two games out with eight games to play, after they were the only NFC East team to win Sunday (thank you Detroit Lions and Denver Broncos!). With two wins in six days they are entitled to some optimism. Not everyone is buying the Giants as contenders, with ESPN's Dan Graziano pointing out that they are still in last place. 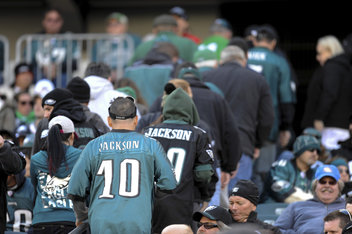 Complete coverage of the Giants' victory over the Eagles.

Giants' uber-fan Joe Ruback, known as License Plate Guy, showed up at Lincoln Financial Field Sunday wearing an Eagles' jersey that pointed out how many Super Bowl Philadelphia has won. Eagles' fans weren't too happy about it.

Running back Peyton Hillis carried 20 times for 70 yards, caught three passes and threw several excellent blocks in pass protection Sunday. ESPN says Hillis, in only his second game with the Giants, looks like a keeper. With Hillis, Brandon Jacobs and the imminent return of Andre Brown from short-term IR the running back spot is suddenly crowded. Could Jacobs be the odd man out? He doesn't think so.

Long snapper Zak DeOssie handed the Eagles their only touchdown on Sunday with a horrible snap over Steve Weatherford's head. He also had a penalty for an illegal snap. Other than that, however, the Giants' special teams performed admirably.

The Giants' defense has not allowed a touchdown in 10 quarters. That stretch coincides with the insertion of middle linebacker Jon Beason into the lineup.

Victor Cruz came out OK after being body-slammed to the ground Sunday by an Eagles' defender. Speaking of injuries, the Giants say they knew pretty quickly that Philadelphia quarterback Michael Vick was not healthy.