The New York Giants head to the Philadelphia Eagles with their first win of the season in their belt. Here are which Giants, if any, to start for your fantasy teams this week.

Well this week I finally get to write a start/sit post after a win. We did win that game on Monday night, didn't we? It almost feels like a loss the way that game played out against the Vikings. After all, Josh Freeman's incompletions got more highlights then Eli Manning's touchdown pass to Rueben Randle.

The Giants' offense didn't necessarily set the world on fire Monday night, but there were some good signs. The emergence of Peyton Hillis as a third down back is a huge thing. The Vikings were extremely susceptible to running backs in the passing game before they faced the Giants, but until Monday night there was no way of telling if the Giants could actually exploit that. Hillis proved to be a capable blocker and pass catcher as he racked up 5 receptions for 45 yards in his first game with the Giants.

The Vikings decided to keep their safeties in the middle of the field to try and contain Victor Cruz and left Hakeem Nicks singled up on the outside most of the game. Nicks was unable to get going as he had his worst game of the season in a great match up. He had a team high ten targets and managed only two receptions for twenty eight yards. The only good news concerning Nicks is the fact that he is now facing an Eagles team that he absolutely destroyed earlier this year. 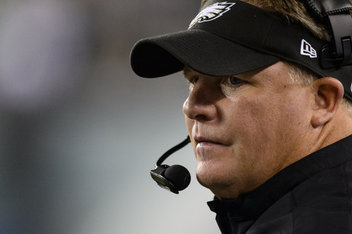 Complete coverage of Sunday's game between the Giants and Eagles.

Well numberFire has Eli turning throwing more interceptions than touchdown this week. Can you blame them? The Eagles actually played a pretty good defensive game last week against the Cowboys picking off Tony Romo twice, but were still exposed by the Cowboys outside wide receivers. If the Eagles continue to give the same looks to the Giants I expect Eli to have to throw the ball to Hakeem Nicks and Rueben Randle on the outside. If those two receivers can make plays for Eli than Eli could finish in the top 12 of fantasy quarterbacks this weekend. If they don't make the plays Eli will struggle.

If Brandon Jacobs is healthy enough to go this week he will be a RB2 in most formats. The Eagles can be run on and Jacobs is the best runner the Giants currently have. While I like his skills much more for standard leagues, I will be putting him in my line ups in PPR as well as there are six NFL teams on byes this week.

Hillis proved that he is the Giants best asset out of the backfield in the passing game. In PPR leagues I would be using him this week if I had injury or bye week problems. I doubt he will get goal line looks with Jacobs back, but you never know. Especially if the Giants go to their patented shotgun draw play at the goal line.

Cruz has gotten a lot of extra attention lately as Hakeem Nicks has struggled to get going. He is still a must start in all formats, but Nicks needs to get going for Cruz to put up the big numbers.

Nicks has really struggled lately, but he has a tremendous match up this week. He still has the skills to get open. He still has the huge hands and big catch radius. He must come up big this week for the Giants to win and for you to win in fantasy football.

Randle was once again hit or miss last week as he made a tremendous reception for a touchdown and a terrible fumble on a punt return. Hopefully facing the team that he torched a few short weeks ago will help him get out of the doghouse. Randle will be in a ton of lineups because of the bye weeks and I expect him to have a very solid game. Much higher than the numberFire projection.

Myers has not been a big part of the offense lately. In his last five games Myers has put up two goose-eggs and a total of seven receptions. I am not starting him in any leagues. The Giants are simply not looking his way, because of a variety of reasons. I would rather start the Jets' Jeff Cumberland or the Cardinals' Rob Housler if you need a bye week fill in.

The quarterback injuries shouldn't affect many fantasy teams as Sam Bradford and Jay Cutler were always 2nd string fantasy QBs. Cutler was having a nice year, but there are plenty of good arms on the waiver wire.

The injury to Reggie Wayne will be tough to recover from for fantasy teams. DHB gets a bump and should be the first guy to take a flyer on, but I would also look to Kendall Hunter and Nate Washington in Tennessee. They are both available in a bunch of leagues and should be able to fill your flex spots.

Doug Martin has not been ruled out for the rest of the year just yet, but owners should immediately pick up Mike James just in case. If James has been scooped up take a look around the waiver wire for high upside guys like Roy Helu Jr. or Jonathan Stewart.

I have to say that this week's episode of my Trick Plays podcast on Itunes is our best episode yet. Please subscribe so you never miss out. Thanks!

Feel free to ask me any start/sit or trade questions on Twitter @Coachesser or by messaging me on Facebook by liking Coachesser’s Playbook. You can also read my articles at www.coachesser.com and listen to the definitive fantasy football podcast on Itunes or Stitcher Radio by subscribing to the Trick Plays podcast hosted by Micah James (@FFMagicMan) and myself.

Keep up with all SB Nation's Fantasy Coverage