With David Baas on IR Jim Cordle returns to the role of starting center for the New York Giants. He began that assignment Wednesday by accidentally wearing Baas' No. 64 jersey at the beginning of practice.

"It was an accident, but it happened to be a good day to do it. Obviously if he was out there, he would have realized when he went to put on a jersey… or maybe not because I didn’t realize it. You just throw a jersey on," Cordle said. "They’re always hanging on the white hanger and you just put it on and there it goes." 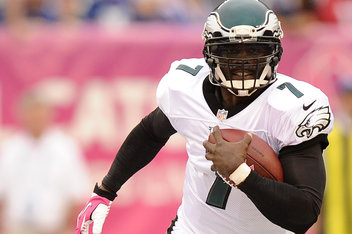 Complete coverage of Giants vs. Eagles.

What does future hold for David Baas?

"Obviously very frustrating. Things happen, that's part of the game. You see a lot of guys out there this year that have gotten injured and mine just happened to be a couple guys rolling into me, guys kicking me. You can't really predict that stuff. You don't plan for it," Baas said Wednesday. "You do the best you can and I did that and I can't sit there and have any regrets. Things happen and you have to move on."

Eagles' running back LeSean McCoy gained only 46 yards on 20 carries in the Eagles' first game against the Giants this season. He hopes to do better this time.

Wouldn't it be nice if the Giants could trade for Minnesota Vikings' running back Adrian Peterson? On Twitter Wednesday night there were rumors the Giants were trying to do just that. In reality, what happened was that an ESPN writer proposed a hypothetical Vikings-Giants deal that sent gullible Twitter users into a frenzy. To clarify, there are no Peterson to the Giants talks. This was one writer using his imagination to propose ideas.

Rounding up where the Giants stand in NFL power rankings.

Here is a quick look at what some folks are saying about the Giants heading into Week 8.