For the first time this season we get to do a 'happy recap' of a New York Giants' game. Let's review the Giants' first victory of 2013, a 23-7 win over the Minnesota Vikings, in our traditional 'Kudos & Wet Willies' style.

The Giants’ Defense: Perhaps the Giants should send flowers to Minnesota coach Leslie Frazier, thanking him for starting the woefully ineffective Josh Freeman (20-of-53) at quarterback, but this was a great effort from a unit that has been maligned for much of the season.

The Vikings’ only score came on an 86-yard punt return by Marcus Sherels. The defense has now given up only three points in its last six quarters of play.

Justin Tuck got the Giants only sack of Freeman, but Pro Football Focus said Tuck, Shaun Rogers and Jason Pierre-Paul combined for 20 pressures. A Rogers' pressure led to a third-quarter interception, which negated a Rueben Randle fumble. Rogers' six pressures in 19 pass rush snaps earned him PFF's highest pass-rushing productivity score of the week, a 23.7. I guess this is why Rogers was playing and rookie Johnathan Hankins was inactive.

Peyton Hillis: Out of the NFL a week ago, Hillis played a key role in the Giants’ victory. With Brandon Jacobs unable to play due to a hamstring injury, Hillis responded. He carried 18 times for 36 yards and caught five passes for 45 yards. The numbers don’t wow, but Hillis’ work was critical as he and Michael Cox (11 carries, 23 yards) made just enough plays to give the Giants some semblance of a running game. Hillis and Cox also and maybe most importantly proved very adept at recovering their own fumbles.

Jon Beason: When the Giants traded with the Carolina Panthers to get the middle linebacker there were many justifiable questions about what the former Pro Bowler had left. After all, he had barely played in three years due to Achilles, knee and shoulder injuries and had lost his starting job with the Panthers to former Giant Chase Blackburn. The answer, at least through two games, is that Beason has plenty left.

His nine tackles on Monday was a team-high for the second straight week. More importantly, the defense has played light years better since Beason replaced Mark Herzlich at middle linebacker, surrendering only three points in the last six quarters.

Mariano Rivera: The now-retired New York Yankees' closer handled the coin toss while wearing an Eli Manning jersey. The Giants lost the toss, but won the game. Maybe Mo should do the coin toss at all the home games.

Antrel Rolle: Five tackles, a huge interception and three passes defensed for Rolle. He had one penalty for a hit to the helmet of a defenseless receiver, but his overall play was huge for the Giants. 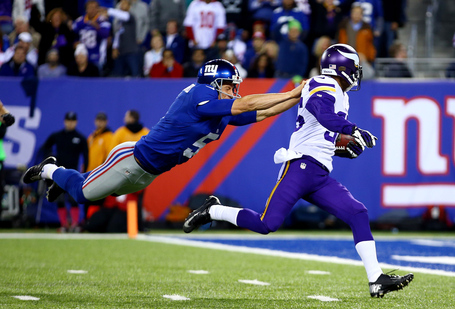 Steve Weatherford dives to try to prevent Marcus Sherels from completing an 86-yard punt return for a touchdown during Monday's game.

Hakeem Nicks: Two more drops on balls that hit him directly in the hands for the guy who is supposed to be the Giants' No. 1 receiver. Yes, he dislocated a finger a couple of weeks ago. Yes, Eli Manning overthrew him on a play where he was open in the end zone for a touchdown. Nicks was targeted a team-high 10 times by Manning and caught only two balls. The Giants need better production from him.

Giants' Punt Coverage: Marcus Sherels' 86-yard punt return was almost comical. This was a terrific punt to the sideline by Steve Weatherford, who seemed to be the only one who remembered that somebody has to tackle the guy who catches the ball. Weatherford tried to do that -- with zero help from the other 10 Giants on the field -- for about the last 40 yards of the return. The punter finally dove at Sherels near the goal line, ending up with a penalty for a horse-collar tackle. At least he tried. It sure looked like no one else did.

Mathias Kiwanuka: While the rest of the defensive line came up big, Kiwanuka was quiet with just one tackle and no pressures. Kiwi, those footsteps you hear belong to rookie Damontre Moore, who has to start getting some of your playing time if you don't do better than that. 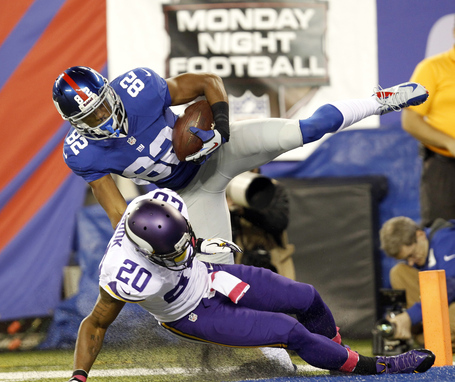 Rueben Randle: Randle was, well, Randle-esque on Monday night – the very definition of a ‘Kwillie.’ He made a brilliant play to haul in a 24-yard touchdown pass from Manning, going over the top of a Minnesota cornerback to make an incredible leaping catch on a 50-50 throw Manning. That was one of those ‘here, make a play’ throws from Manning, and Randle made one. Later in the game, though, Randle gifted Minnesota field position at the Giants’ 31-yard line by fumbling on a punt return. Headed out of bounds on the right sideline Randle was carrying the ball in his left, inside, arm. That allowed the ball to be stripped. Carry it properly and all he has to do is innocently step out of bounds.

The Giants’ Offense: The Giants engineered their two longest drives of the season Monday night, a 17-play, 68-yard drive that took 9:36 and a 16-play drive that 8:31. Both resulted in field goals. The Giants possessed the ball for 36:22 and the offense did not turn the ball over, relying on just enough production from the run game and a primarily short passing attack. Still, they couldn't turn those long drives into touchdowns. Victor Cruz dropped a touchdown pass. Hakeem Nicks dropped two balls. Eli Manning threw at least one ball that should have been an interception. The Giants did manage to run the ball 32 times, but only for 64 yards (2.0 yards per carry). It was enough to beat a woeful Minnesota team, but still needs to get better.

Eli Manning: A game without an interception? What is the world coming to? Manning played better, completing 23-of-39 for 200 yards and looking much more in control than he has much of the season. He did have one potential interception dropped by the Vikings, and Rueben Randle made a fantastic catch on the 24-yard touchdown pass, leaping over a defensive back to make the play on another risky throw. Manning also missed several throws that could have been big plays that would have blown the game open. Progress, yes. Perfection, no.