After beating the Vikings on Monday Night Football, Giants rise from the gutter.

Share All sharing options for: NFL Power Rankings 2013, Week 8: Giants No. 29 after victory

The mighty have fallen. Peyton Manning and the Broncos lost an emotional game against Andrew Luck and the Colts Sunday night. The loss means only the Chiefs at 7-0 remain perfect, but still they cannot grab the top spot in Big Blue View's power rankings.

The Saints had a bye week, while the Seahawks, 49ers and Packers all notched another win. New England fell to the Jets, the Bears lost and may be without their quarterback, and in the NFC East the Cowboys continue their stranglehold on the division. 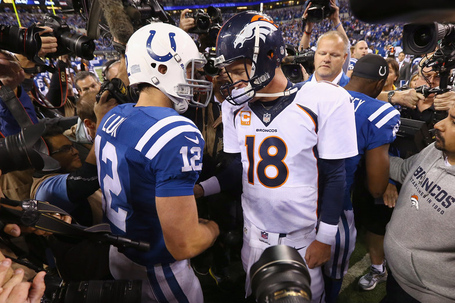 Here are the Big Blue View Power Rankings for Week 8:

1. Denver Broncos (6-1): It was an emotional affair and a tough loss for the Broncos, but perhaps not going undefeated will pay off in the long run. This is still the best offense in football. (LW: 1)

4. Kansas City Chiefs (7-0): Even though they're unbeaten and this defense is the real deal, could the Chiefs really beat Denver, Seattle or New Orleans? I'm still not convinced. (LW: 4)

5. Indianapolis Colts (5-2): The Colts were the first team to knock the Broncos off of their perch atop the power rankings. Now, Luck and Co. have knocked off Seattle, San Fran and Denver. (LW: 7)

6. San Francisco (5-2): Quietly, the Niners have reeled off four straight wins. With Jacksonville this week, they're about to have two weeks off. (LW: 6)

12. San Diego Chargers (4-3): The Bolts look to be contenders under Mike McCoy. The issue is they place in the same division as the Broncos and Chiefs. (LW: 14)

15. Baltimore Ravens (3-4): This the not the Super Bowl contender from a season ago, but despite their woes the Ravens still have a high ceiling. (LW: 13)

17. Buffalo Bills (3-4): Even without their first-round pick, the Bills are winning some impressive games. (LW: 23)

21. Pittsburgh Steelers (2-5): With wins against the Jets and Ravens in back-to-back weeks, the Steelers will be a menace for other AFC contenders. (LW: 29)

23. Houston Texans (2-5): It was a loss, but the Texans were competitive and nearly beat an undefeated squad behind Case Keenum in his first start. Not so discouraging. (LW: 20)

29. New York Giants (1-6): Finally, a win. The Giants finally forged a running game and the defense played its best game of the season, albeit against a lowly Vikings offense. (LW: 30)

30. Minnesota Vikings (1-5): Josh Freeman did not look like he could solve any of Minnesota's issues last night. (LW: 28)

32. Jacksonville Jaguars (0-7): There is not a lot of good football being played in Jacksonville these days. (LW: 32)