Giants vs. Vikings 2013 Preview, Prediction: Giants will get first victory

The Giants are still searching for their first victory of 2013. Tonight they should get it.

Share All sharing options for: Giants vs. Vikings 2013 Preview, Prediction: Giants will get first victory

The New York Giants (0-6) and Minnesota Vikings (1-4) are set to meet in the worst match-up on paper in the history of Monday Night Football. The teams combined 1-10 record makes their winning percentage .091, worst-ever for a Monday night game.

That's embarrassing, of course, and unexpected. The Giants won the Super Bowl two years ago and won 9 games last season. The Vikings made the playoffs in 2012.

It is also a fact the Giants probably could care less about. Truth is they have been embarrassed by their own performance all season. From the very first offensive play of the year, an intercepted screen pass against the Dallas Cowboys, the season has been one long nightmare, one awful performance after another.

Can the Giants change that? They have continued to talk about still being within striking distance in the weak NFC East, and about how they can and will get back on track.

If they are going to salvage anything from this shipwreck of a season, whether or not they have any realistic chance of competing in the division, they have to beat the Vikings on Monday night.

I believe they will.

Giants should improve, but by how much? 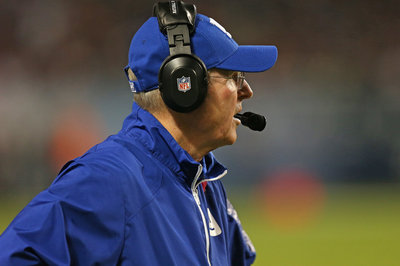 How many games will the Giants win? One would be a good start.

To do that, of course, the Giants have to stop being so generous. It's been Christmas every week for the Giants' opposition as Big Blue has gifted opponents with a league-worst 23 turnovers while taking the ball a way only seven times, for a -16 takeaway/giveaway ratio, also worst in the league.

They will have to deal with Adrian Peterson, the league's best running back. A year after gaining 2,097 yards and nearly breaking Eric Dickerson's single-season record of 2,105 yards Peterson has not yet matched that output. He has two 100-yard games in Minnesota's first five, with his best game being 140 yards Week 4 against the Pittsburgh Steelers. Peterson bested that 140-yard total eight times a season ago, and you have to know there is an explosive game coming from him soon. The Giants have to find a way to make sure it isn't against them.

They have to find a way not to make Josh Freeman, in his first start for Minnesota, look like Peyton Manning. It would help if their league-worst pass rush could study their maps and find the way to the quarterback.

I am on record as having said that I believe the rest of the Giants' season will bring better football, and better results, than what we have seen thus far. How much better is anyone's guess.

The Giants are not a team devoid of NFL talent. They have a franchise quarterback, albeit a struggling one. They have a quality coach. They have players who have won, and understand how to do that. They have a few intriguing young players. As I have said before I don't expect a miraculous turnaround, but I do believe there will be improvement.

Tonight should mark the first step in that improvement as the Giants finally get in the win column.