New York Giants' pass rush: It's lost, can it be found?

What can the Giants do to fix their league-worst pass rush?

Share All sharing options for: New York Giants' pass rush: It's lost, can it be found?

The New York Giants' pass rush is broken. With a league-worst five sacks in six games that is inarguable.

Why has this facet of the Giants' defense, the very thing the defense has been built around during the Tom Coughlin era, fallen off so dramatically? More importantly, can anything be done to fix it?

Let's dive deeper into the muck here and see what we can uncover.

'I don't care what you bring, if the quarterback's getting the ball out of his hands, then you're not going to get there.' - Justin Tuck

While the Giants had extra time between last Thursday's Chicago Bears game and their preparation for Monday's meeting with the Minnesota Vikings coach Tom Coughlin promised to put in time studying his team's anemic pass rush. He didn't exactly discover anything earth-shattering, or anything that required a whole lot of extra study.

"I see obviously we don’t have many numbers. We’re not getting to the quarterback," Coughlin said. "I think what has to happen, for us, is we've got to do a better job in these one-on-one situations. ... Some of our pressure packages we're not getting home with the kind of speed and timing that we need, so it's a combination of things.

Defensive end Justin Tuck acknowledged the need to win one-on-one, but seemed to also indicate there are other factors.

"We're not winning enough. Regardless of if that's the quarterback getting the ball out of his hand in less than 2.5 seconds, which normally happens, or we just didn't have a good rush or that call doesn't bode well for us being in a passing situation. It's a combination of all of that. I'll be the first one to tell you that it starts with me, it starts with what I do individually, and I think every player on the D-line feels the same way. But there are some things that we still need to work on from a defensive standpoint to get us in situations where we're not taking two steps and looking for the ball to be out and trying to bat passes down."

Let's break down some of the reasons for the lack of ability to get to the quarterback.

Give the opponents credit

In a terrific piece on the Giants' lack of a pass rush, Conor Orr of the Star-Ledger uncovered research by the Giants that shows 78 percent of passes thrown against them this season have been released in 2.8 seconds or less. The research shows that average time to sack quarterbacks this season is between 3.33 and 4.64 seconds, meaning opposing offenses are rarely giving the Giants an opportunity to crank up a real pass rush.

Here are a couple of examples.

If you count defenders at the line of scrimmage, the Giants actually have eight players engaged in rushing Jay Cutler and the Bears have essentially a one-man rout. Cutler fires the slant to Brandon Marshall for a completion virtually as soon as he catches the snap.

Here is another quick slant. The Giants have six rushers against only five blockers, but zero chance to get anywhere near Cutler before the ball is out.

Pierre-Paul has not been the player he was two seasons ago when he recorded 16.5 sacks and was named All-Pro, or even the guy was last season when he had 6.5 sacks. Offseason back surgery robbed Pierre-Paul of any preseason practice time and when you watch the All-22 film you see a player who is not exploding off the ball and is, in fact, often the last defensive lineman moving following the snap.

That's not the same guy we saw two seasons ago who was often unblockable no matter what offenses tried to do with him.

Here is an interesting quote from Tuck about Pierre-Paul:

"I honestly think it's more mental than physical with JPP at this point," Tuck said. "I think he really wants to go out there and play and play well, and it ain’t happening. And when it hasn’t happened for him, I think he takes it hard. So the people around him have to keep him built up because he’s a hell of a football player and obviously things aren’t going his way right now."

It isn't only the lack of numbers from Pierre-Paul that is hurting the Giants. Teams aren't even bothering to double him much of the time any more, at least the Kansas City Chiefs and Chicago Bears didn't bother the past two weeks.

Mathias Kiwanuka (1.5 sacks, 13 pressures) and Tuck (1 sack, 15 pressures) are complementary players at this point. They need JPP to draw attention, as do the other Giants' pass rushers. Right now that isn't happening.

'if you're going to bring them, let's get home. Let's be a factor. That's been missing.' - Tom Coughlin

The Giants have blitzed on 91 of their 432 defensive snaps this season, 21.6 percent of the time. Defensive coordinator Perry Fewell promised to be more aggressive this season than last, when he blitzed 26.3 percent of the time. The raw numbers would indicate that hasn't been the case. Looking at the results, though, it's hard to blame Fewell for not sending extra pass rushers more often.

In those 91 blitzes, the Giants have sent a total of 130 extra pass rushers, meaning they are often sending multiple blitzers. They have two sacks in those 91 blitzes, only one from a blitzer (Spencer Paysinger). Those 130 blitzers have generated only one hit and 13 quarterback hurries.

"When you bring five, you do have a chance to get singled up and we have to win when that takes place," Coughlin said. "I would like if you're going to bring them, let's get home. Let's be a factor. That's been missing as well."

The Giants, unfortunately, don't have dynamic players who can do that consistently. They have sent Terrell Thomas, Ryan Mundy and Antrel Rolle on a combined 28 blitzes and gotten one hurry and a blocked pass from them. They have blitzed Paysinger 42 times and gotten a sack and four hurries. Jacquian Williams has five hurries in 30 blitzes. Williams, though, isthe team's best coverage linebacker.

The Giants have, of course, lost all of their games. They have rarely led. Orr pointed out the stunning fact that they have led for less than three minutes in the second halves of games this season. That means they simply are not getting opposing offenses into those situations where they can abandon worrying about the run and simply sell out to get to the passer. 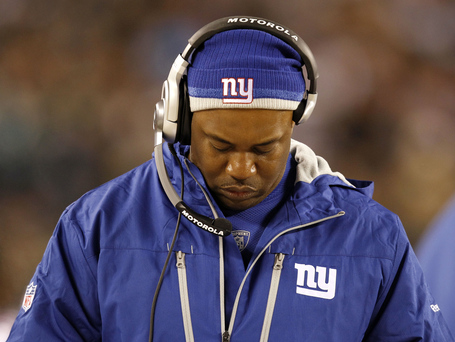 Are there any? With their current personnel, honestly not a whole lot.

They could, of course, sprinkle magic fairy dust of Pierre-Paul and turn him back into the monster he was in 2011. Otherwise, they just have to keep working with him and waiting for that player to return -- if he still exists.

The Giants aren't going to turn Paysinger into something he isn't, or make guys like Beason, Thomas, Tuck, Kiwanuka and Cullen Jenkins young players again who have yet to lose explosiveness to age or injury.

Scheme-wise they need to find some way to discourage all these short routes, force quarterbacks to hold the ball and look for a second read. Do I know how they do that? No, I don't. That is part of Fewell's challenge.

The Giants would love, I am sure, to get rookie defensive end Damontre Moore on the field more and see if he can help jump-start the pass rush. Unfortunately, the talented third-round pick has had an injury-plagued first season. A shoulder injury suffered in the first preseason game lingered well into the season costing him practice and playing time. A hamstring injury suffered vs. the Philadelphia Eagles limited him to five snaps in that game and kept him out vs. the Bears.