Benching Eli Manning is not a consideration for Tom Coughlin.

"If I hear you right, that hasn’t crossed my mind at all," Coughlin said.

From the perspective of someone who covers the Minnesota Vikings I guess the question is understandable. Manning has throws a league-worst 15 interceptions as the Giants have fallen to 0-6. He has a passer rating of just 64.0, 33rd in the league. The only quarterbacks below Manning are Josh Freeman, the Vikings' new starter, and Blaine Gabbert of the Jacksonville Jaguars. The old Minnesota starter, Christian Ponder, is directly above Manning at 65.9.

'If I hear you right, that [benching Manning] hasn’t crossed my mind at all.' - Tom Coughlin

In New York, however, that's not the case. Nor should it be. Manning will make his 144th straight regular-season start, and he will continue to do just that until or unless an injury sidelines him. 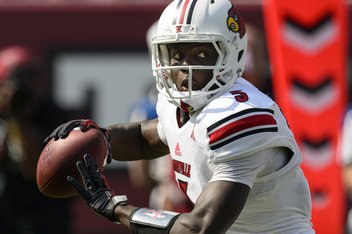 There is still time to vote in the Big Blue View poll.

"I’m sure he would tell you that he would like to play better, there’s no doubt about that," Coughlin said. "I have every confidence in the world that he will. We’re at this point in the season. It’s not early in the season, I’m not going to say that at all, but there’s a lot of football that has to be played here and we’re counting on that part of it."

What choice do the Giants have, really? They aren't the Vikings, where three bad quarterbacks don't equal one good one. Manning is a two-time Super Bowl MVP who is as good as anyone when he is right. Oh, and his backups are named Curtis Painter and Ryan Nassib. Maybe if Coughlin actually WANTED to get fired he would play them, but not if he wants to right the Giants' ship.

Coughlin, as he has done previously, was quick to point out that the Giants' issues don't begin and end with Manning.

"We know there’s great talent there and this is something we’re all going through it, not just Eli.  There’s some growing pains here with some different people involved and some people we didn’t get from the offseason that we would have hoped," Coughlin said. "It’s not early in the year, I’m not saying that, I’m saying hopefully we’ll settle down and we’ll play the kind of football we’re capable of playing."