For 0-6 New York Giants, youth must be served

The New York Giants need to get their young players on the field to find who can and cannot help them in the future.

Share All sharing options for: For 0-6 New York Giants, youth must be served

When New York Giants' coach Tom Coughlin gave players and coaches on his 0-6 team the weekend off he asked them all to "think about the situation we’re in and how your part can be a part of the solution."

We have no idea what the players and coaches have come up with. We will probably have to wait until next Monday's game against the Minnesota Vikings to actually find out. That, however, won't stop us from offering some ideas.The biggest idea is one that may or may not help the Giants the next 10 games, but has to be done to prepare for the future -- the kids have to play. 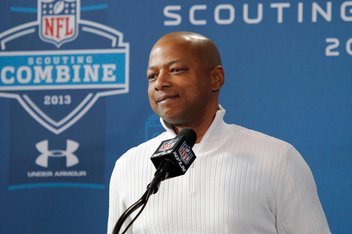 The Giants are paying a price for not getting enough quality players out of recent draft.

Asked on Friday about giving young players more playing time the rest of the season, Coughlin was non-committal:

"The way things go in the National Football League, you’ll have some opportunities along the way with young people. If they’re not in the mix as a one, the chances are at some point in time, they’ll be in the mix is a very high percentage," Coughlin said. "Do I think ahead? No. I don’t think any more than the next game."

The "I don't think any more than the next game" part of Coughlin's answer is typical of most any coach in the highly-competitive NFL. There is a lot -- including in some cases the coaches' future employment -- riding on each game. Having tunnel vision and focusing only on the next opponent, the next game, is the way coaches are made. To survive, it's the way they have to be made.

The Giants find themselves in a different situation, however. Coughlin, and everyone in the organization is likely loathe to admit it, but this season is lost for the Giants -- at least in terms of the grandiose goal of being the first team to win a Super Bowl in their home stadium. The year, however, does not have to be a total bust. The brutal truth is that, while it would be nice to win a respectable number of games the rest of the way the outcomes of the next 10 games don't really matter. What the Giants learn about who can -- and can't -- be part of the long-term solution does matter.

That means that even though Shaun Rogers and Mike Patterson are playing well, Johnathan Hankins has to get a healthy chunk of their snaps. It means Markus Kuhn should play if he is able to come back off the PUP list eventually. If he's healthy enough, it means Damontre Moore should get some of the snaps that have gone to Justin Tuck and Mathias Kiwanuka. It means Jacquain Williams or Mark Herzlich should play instead of Keith Rivers. It means rookie running back Michael Cox needs to get some snaps. It means it's time to get James Brewer and Brandon Mosley enough snaps to figure out if they can be part of the offensive line in the future.

Get the young players on the field. It has to be done.