Why are the Giants 0-6? Tom Coughlin knows exactly why

Head coach Tom Coughlin knows why the Giants have not yet won a football game this season. He just hasn't been able to solve the issues.

Share All sharing options for: Why are the Giants 0-6? Tom Coughlin knows exactly why

When New York Giants' coach Tom Coughlin met with the media Friday afternoon he got right to the heart of the matter when it comes to his 0-6 football team. 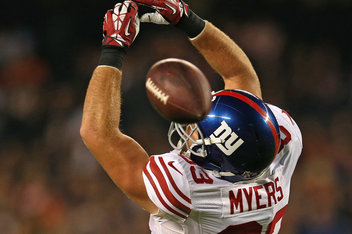 A look at the three interceptions thrown Thursday by Eli Manning.

So, what is it coach?

"When you look at it, when you break it down, if you look at the defensive side of the ball, no turnovers and no sacks. The quarterback pretty much stands back there and does what he wants to do without a lot of pressure," Coughlin said. "He can run the ball when he wants to and comes out of the pocket when he wants to.

Now, about the turnover-infested offense, which has a league-worst 23 giveaways.

"You look at the offensive side of the ball and what do you have to show again. You have the three turnovers. The three turnovers in the football game, which really right off the bat when you're talking about a team like Chicago who thrives on that and who had 55 points off of turnovers; when you see that and you go minus-three in the turnover ratio right off the bat, then you really don't give yourself much of a chance," Coughlin said.

"When you look at the things that we do to ourselves and you go back to the oldest axiom in football, which is first you have to stop from beating yourself before you can go forth to beat the opponent. We’re in our sixth football game and we’re still talking about beating ourselves. Not what the opposition does, but what we flat out do to ourselves."

Coughlin said the Giants, who have only five sacks in six games, would take a "hard look" at what is going on with the pass rush.

"Why is it that we are not getting home? What can be done? Perhaps we can tweak the system a little bit. Be creative in some respects trying to get some things that will help us," Coughlin said. "But by and large, you've got to beat the guy who is trying to block you and we're really not doing that."

Coughlin was asked if the season could still be salvaged. Of course, the veteran coach said it could.

"Absolutely. Not unless we start playing a heck of a lot better and doing the things that I just described. We know the formula. We've used it for years here. There were years that we set the record for fewest turnovers. Seems like a long time ago," Coughlin said.

Coughlin was asked about the inconsistency this season when throwing the ball to second-year receiver Reuben Randle. He seemed to indicate that Randle did not pick up on Manning's intent pre-snap on the second interception Thursday, which Tim Jennings returned for a touchdown. Coughlin said Randle's body language was "a little bit indicative" he was running the hitch -- which he, of course, did not.

"One guy signaled one thing with his body language and the other guy didn't pick it up. That's kind of the way this has been with him. He's made some outstanding plays as he did the other night," Coughlin said. "I wasn't real happy about the play where he threw the ball on the ground either. You have to be smarter than that. You have to understand that could have gone the other way. Here we are knocking on the door. He's a talented young man who is figuring this thing out. He brings a lot to the table, we just have to keep working with him and refining that talent."

In reference to the pick six, Coughlin did not absolve Manning of blame.

"Eli should have seen the corner. It would have helped him to go somewhere else, whether Rueben was right or wrong. I'm sure he would tell you the same thing," Coughlin said.

The coach was asked if players are taking the losing as hard as he is. Perhaps a bit of his frustration, and maybe part of the reason for the 0-6 record, seeped through in his answer.

"If they're not, they're not smart enough to figure it out," Coughlin said. "I think there's a majority of guys in the room who are very much aware, and frustrated."