Giants at Bears 2013 Week 6 Scouting Report: A look at the match-ups

Share All sharing options for: Giants at Bears 2013 Week 6 Scouting Report: A look at the match-ups

The New York Giants, still looking for their first victory of the 2013 NFL season, face the Chicago Bears on Thursday Night Football. Here is a complete breakdown of the match-up.

The main priority for the Giants has got to be taking care of the ball. The Giants have a league-worst 20 turnovers (4.0 per game), while the Bears' defense is fourth in the league with 2.8 takeaways per game. Giants' quarterback Eli Manning has a league-worst 12 interceptions, so the Bears might be licking their chops anticipating some opportunities Thursday night.

The Giants, however, might also find an opponent in Chicago that gives them opportunities at big plays. The Giants have historically been a big-play offense built to take shots deep down the field. The Bears have surrendered 28 pass plays of 20 yards or more through five games, second-most in the league.

"I'm hoping that we can protect the passer," said Giants' coach Tom Coughlin. "They've got some outstanding pass rushers. They spread it around, too. Their sacks, I know their linebackers have four of them. They spread it around. The front is physical and tough. The corners are tough. They play hard and they're very good ball strippers."

The Giants will play without starting running back David Wilson, who suffered a neck injury Sunday against the Philadelphia Eagles. Wilson has 44 carries for 146 yards (3.4 yards per carry) for the Giants, who are last in the league in rushing with 56.8 yards per game. Brandon Jacobs and Da'Rel Scott, released last week and re-signed on Tuesday, will carry the rushing load for the Giants Thursday night.

The Giants are only 16-of-61 (26.2 percent) on third-down conversions this season. Offensive coordinator Kevin Gilbride pointed out this week that 35 of those 61 third downs have been at least 11 yards or more.

When The Bears Have The Ball

Under first-year head coach Marc Trestman the Bears have been explosive offensively. They are scoring 29.0 points per game, fourth in the league, while running Testman's West Coast offense.

Quarterback Jay Cutler has four receivers with at least 25 catches. Brandon Marshall (31), Alshon Jeffrey (28), Matt Forte (27) and former Giant Martellus Bennett (25) give Chicago an array of weapons to throw to.

Forte is leading the Bears runners with 81 carries for 375 yards (4.6 yards per carry) and 3 touchdowns.

The Giants continue to struggle rushing the passer as they have only five sacks, 31st in the league. 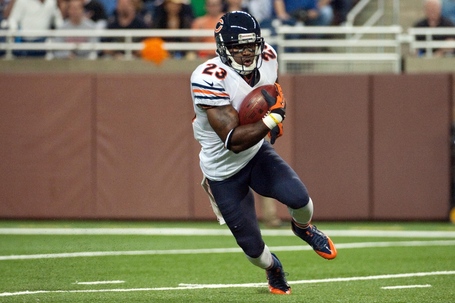 Giants' punter Steve Weatherford has struggled with his placement this season, surrendering two returns for touchdowns. He had a good game Sunday against the Philadelphia Eagles, and needs another one Thursday. Devin Hester is averaging a career-low 7.0 yards per punt return thus far in 2013, but he he still has more punt returns for touchdowns -- 12 -- than anyone in the history of the game. The Giants are still surrendering 19.3 yards per punt return. Hester is also averaging 31.4 yards on kickoff returns, the second-best number of his career.

With David Wilson likely out this week either Jerrel Jernigan or rookie Michael Cox will likely handle kickoff return duties for the Giants. Jernigan averaged 20.5 yards on two returns last week. Rueben Randle is averaging 6.3 yards on punt returns. The Bears are giving up 15.2 yards per punt return.

Chicago placekicker Robbie Gould is 8-for-8 on field-goal attempts this season. For the Giants, Josh Brown is 4-of-6.