Antrel Rolle: 'This is a 12-game season for us'

Share All sharing options for: Antrel Rolle: 'This is a 12-game season for us'

You would expect the winless New York Giants to be down on themselves at this point. Not Antrel Rolle.

In a classic episode of Antrel being Antrel, the Giants safety isn't bothered by being 0-4 right now -- because he expects his squad to run the table and go 12-0 to finish the season.

"This is a 12-game season for us at this point. Nothing that has taken place matters," Rolle said Monday. "The guys just have to believe again. We have to get that good feeling again as far as winning ... We will. We definitely will get back to it again." 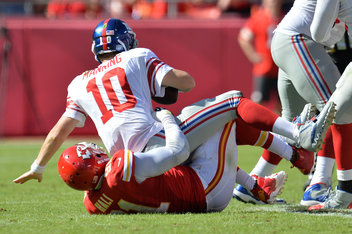 Giants are on there ... somewhere.

Rolle said he hasn't showed his face around New York since the team has been losing, and won't as long as the team continues down that path. But he's confident change is in the forecast.

Although the Giants are at the bottom of the NFC East, no other team in the division has really taken off and ran away with it yet. The Washington Redskins and Philadelphia Eagles both sit at 1-3, a game ahead of New York, while the division-leading Dallas Cowboys are just 2-2 and are days away from facing the undefeated Denver Broncos.

Because the division is arguably the weakest in football, Rolle is optimistic the Giants can still go on a run.

"No one has really taken off with a huge lead in the division," he said. "But more importantly than what's happening in our division, we need to fix ourselves and give ourselves a chance to even go in there and compete and to battle for winning that division title."

Tom Coughlin's message to the team this week is for the players to come together as a team. Rolle felt despite the lopsided loss to the Kansas City Chiefs, there was more fight in the players and more intensity in the game.

Rolle called the 0-4 start "bad football," but bad football that is now in the rear-view mirror. And of course, there's plenty of room for improvement in Quarter 2.

"We can all come together better and just help our team out a whole lot more -- even the fans bring us up, uplift us a little more, because the little things like that help us out," Rolle said. "We need that edge and that's what we're looking forward to."

Not only have the Giants failed to find the win column in the regular season, but the team went an entire preseason without earning a W. Consequently, Rolle admits his team may have forgotten how to win games.

Losing week after week has altered their mindsets, the safety said, and it's easy to lose that mental toughness that helps fight adversity. Now, the Giants need to rediscover their confidence and re-establish their faith in the team.

"I consider myself as being mentally tough and can pretty much overcome anything, and I even find myself at times like, 'Man, again, we are going to do this?'" Rolle said. "I find myself doubting at certain times, and I'm human. ... I know it can happen to anyone.

"From this point on I told the guys we just have to believe that we can do it -- not just tell yourself that you believe it but really believe it. The mind is a powerful thing and it controls everything within your body."