How much can you fault head coach Tom Coughlin for the fact that the Giants missed the playoffs a season after winning the Super Bowl?

For Tom Coughlin, 2012 was a year full of tremendous accomplishment and had to be one of great personal satisfaction. At least the beginning of it. His second Super Bowl title, another trip to the White House, going in stature from a coach whose job seemed in jeopardy every year to one was talked about as a potential Hall of Famer.

The 2012 season that followed that title, however, was one of bitter disappointment. This was not the Giants' finest hour, nor will it be remembered as Coughlin's best work.

The Giants, as we know, went from 6-2 with a 2.5-game lead in the NFC East to 9-7 and failing to qualify for the playoffs. The reasons for the fall can, and will, be debated from now until next season begins. We only know this for certain -- for a defending Super Bowl champion returning the majority of its core, including a tremendous coach and two-time Super Bowl MVP quarterback -- the 2012 season will be remembered as one during which the Giants stunningly under-achieved. Back-to-back Super Bowl titles might not have been a realistic expectation, but the 2012 Giants should have at least qualified for the post-season tournament.

How culpable is Coughlin for the failure of the 2012 Giants?

We know how the year ended for the Giants, but to truly trace the arc of the season and find out where it went wrong you have to go back to the beginning. All the way back to training camp in Albany.

Coughlin loves his sayings and slogans, loves to lay out themes for a season, for a month, for a week. His theme for 2012 was "Build The Bridge." What he meant by that was build the bridge from the six-game winning streak that won a title and carry that momentum and attitude into the new season. Only, it took Coughlin seemingly forever to explain exactly what it meant -- to both players and the media. The bridge never really got built. Not even close.

Truth is, wide receiver Victor Cruz likely had a better slogan. During camp he was handing out t-shirts to teammates that simply said "Business As Usual."

Coughlin, as Giants' fans know, has been asking himself -- and his players -- what happened during Weeks 15 and 16, games the Giants needed to win only to be outscored 67-14. Some of the seeds of what happened during the 9-7 season are likely found in an answer Coughlin gave while appearing on WFAN with Mike Francesa. He had admitted that he felt the Giants had practiced well prior to the Baltimore game and was stunned by how poorly the team played:

The obvious implication? The head coach wasn't sure, week-to-week, what he was going to get from his team in 2012. That's not anything like the admission Rex Ryan of the New York Jets made after the 2011 season when he said that he had no idea there were problems in his team's locker room. It is, however, an indication that maybe the coach and his players could not always get on the same page in 2012.

Maybe the seeds of that were sewn all the way back in Albany.

Go back over the course of the season and it's certain that there are decisions Coughlin and the Giants would love to have back.

The end of the Week 4 loss to the Philadelphia Eagles, a game the Giants bungled, is one of those. Overly-aggressive final-minute play-calling led to a Ramses Barden pass interference penalty that turned what would have been a very makeable 44-yard game-winning field for Lawrence Tynes into a beyond-his range 54-yard attempt that he missed, coming up about two yards short.

"You look at your season, and sometimes when you walk off the field, having lost a game ... for example, the first Philadelphia game 19-17, the game in Washington, 17-16...your thoughts are, 'Boy, I hope this one doesn't come back to haunt me, bite us in the butt in the long run.' But in reality, that's what happened," Coughlin said. 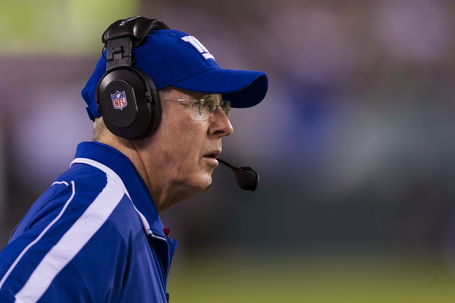 We wrote recently about the Giants' possible regrets about the handling of the Hakeem Nicks situation. In retrospect, it seems the Giants realize they would likely have been better off forcing Nicks to take the full 6-8 weeks of rest and rehab that had been recommended rather than coming back after three weeks.

Perhaps you can also fault Coughlin and offensive coordinator Kevin Gilbride for their handling of first-round pick David Wilson and second-round pick Reuben Randle. There is a legitimate argument to be made that the Giants needed to look past some of the things those young players weren't ready to do, find what they could do, and give them more opportunities to have an impact on the offense.

In any season that doesn't end the way you want it to looking back and seeing things you could or should have done differently is part of the process. That is true in any job or any walk of life -- mistakes get made and some decisions that seemed like the right ones to make just don't pan out.

You can look back on it now and see that a couple of things could have been done differently, that maybe Coughlin left some of his magic on that podium he shared with Obama.

Does that mean Giants' fans should have any less confidence in Coughlin going forward? Hardly. Does a season like the one the Giants just had require some introspection? Certainly. The venerable Giants' coach may not have had his best season -- but we know the fire to win still burns in Coughlin -- and that means Giants are still in good hands.