Defensive tackle is a position riddled with question marks for the New York Giants as they look forward to the 2013 season.

We continue our series of positional reviews for the New York Giants today by turning to the defense for the first time. We will begin our look back at the 2012 defense and a look ahead to how the 2013 Giants' defense might be different by starting at the defensive tackle position.

We have already discussed the Giants' defense quite a bit since the 2012 season ended, and one of the themes has been that the run defense just has not been good enough. In 2012 the Giants surrendered 4.6 yards per rushing attempt, 26th in the league and not nearly good enough. In 2011 the average per rushing attempt against the Giants' defense was similarly awful -- 4.5 yards per attempt.

How much of the blame for that inadequate run defense falls on the defensive tackles? My belief is there are bigger issues at linebacker and sometimes with the run support from the defensive end position, but the tackles can't be blameless. Let's look at the players who comprised the Giants' defensive tackle rotation in 2012 -- and, yes, we need to go into this understanding that the Giants at times use defensive ends Justin Tuck, Jason Pierre-Paul and Mathias Kiwanuka inside in place of their tackles.

Linval Joseph -- The three-year veteran out of East Carolina has emerged as an excellent defensive tackle. He had 59 tackles, five for loss, and four quarterback sacks in 2012. He had a Pro Football Focus score of +6.3. PFF credited Joseph with 28 stops -- plays resulting in an offensive failure -- in 2012, and only seven defensive tackles made more. Joseph is a good player, but at this point not a dominant, Pro Bowl-caliber player. Maybe in 2013 he takes that step.

Chris Canty -- Still a very good player, but after eight years in the league one with questionable knees. He played well for the Giants 2012 with three sacks and five tackles for loss, but played in only nine games. He compiled a +6.6 PFF grade in his limited playing time.

Rocky Bernard -- Started off well in 2012, missed a few games with an injury, and was never really the same. The 33-year-old Bernard has been in the league for 10 years and is little more at this point than rotational depth. 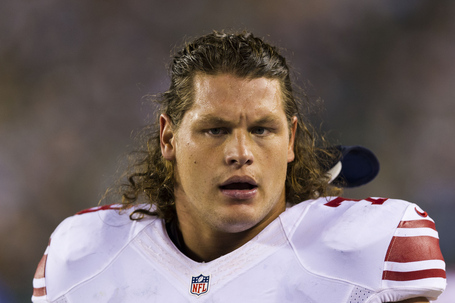 Markus Kuhn -- The German-born seventh-round pick from North Carolina State played in eight games with four solo tackles before going down to a season-ending knee injury. He ended the season with a -5.4 PFF grade, but is a very inexperienced player who did show strength and potential as a run defender. Could be part of the rotation in 2013.

Marvin Austin -- The Giants drafted Austin in the second round in 2011 and are still waiting to get some return on their investment. Austin played only 103 mostly invisible snaps in 2012 and made eight tackles, five of them solo. The Giants had hoped the 6-foot-2, 312-pound Austin would become an anchor in their defensive line, but he has yet to even become a reliable part of the rotation.

The Giants could use help here, and you wonder if the best way to get it might be to look for a veteran or two to bring in via free agency. Bernard is a free agent and it seems unlikely the Giants bring him back. Canty's durability is a question mark. The ability of both Kuhn and Austin to become reliable parts of a defensive tackle rotation is probably even a bigger question than Canty's knee. The Giants tried to bring in the massive run-stuffing tackle Shaun Rogers last season, and health issues torpedoed that idea. Personally, I wouldn't be surprised if they try something similar this year.