A look at wide receiver as we continue our positional reviews for the New York Giants.

Let's continue our series of positional reviews for the New York Giants by looking today at wide receiver.

The biggest reason? With Hakeem Nicks slowed and a third wide receiver not consistently stepping up, teams paid much more attention to Cruz and his yards per catch averaged dropped from an insane 18.7 yards per catch to a more pedestrian 12.7.

Hakeem Nicks -- Give Nicks immense credit for doing the best he could despite first a broken foot that limited his pre-season time and then an injured knee that took away his burst. His best, though, wasn't good enough. In 13 games he caught 53 passes, down from 76 and 79 the two prior seasons. He had a career-low three touchdown catches, and a career-worst 13.1 yards per catch average.

Nicks just wasn't himself, and the Giants failed to recognize soon enough that he wasn't really playing well enough to give them what they needed.

Rueben Randle -- Caught 19 passes, three for touchdowns, and by the end of the season showed that he has a bright future. Nicks caught 47 passes as a rookie, but Randle's first season compares favorably to many other Giants' rookie receivers. Here are the numbers of some standout Giants' receivers as rookies: 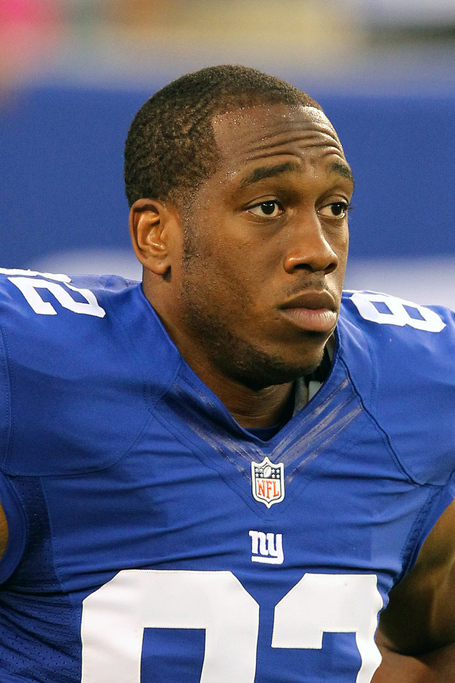 Domenik Hixon -- Played in 13 games, caught 39 passes and at times looked like a guy who could be valuable as third or fourth wide receiver. Also showed at the end of the season that he was healthy enough after two knee surgeries to return punts.

Jerrel Jernigan -- Caught only three passes, but by the end of the season the 2011 second-round draft choice had clearly surpassed Ramses Barden on the depth chart. There could be a big opportunity for Jernigan in 2012 as a kick returner and wide receiver, especially if the Giants chose not to bring Hixon back.

Ramses Barden -- In his fourth year, Barden finally had a moment in the sun when he caught nine passes for 138 yards against the Carolina Panthers. Unfortunately, he couldn't sustain that success and ended the season with only 14 catches.

Cruz is a free agent and it would be stunning if he doesn't sign a very rich long-term contract with the Giants soon. Nicks is always nicked up in some way, but the Giants need for him to be healthier and more productive next season. They will also look forward to Randle stepping up and filling the role Manningham used to play for the Giants as an explosive third wide receiver. Jernigan could have an opportunity, because Barden and Hixon are both free agents. Barden is almost certain to be shown the door, and it woudn't be a total shock if the Giants also let Hixon seek a new team.