A look at the quarterback position as we continue looking back at what went wrong in 2012 and looking ahead to what needs to change for the New York Giants in 2013.

We have reviewed the New York Giants coaching staff, including head coach Tom Coughlin and coordinators Kevin Gilbride and Perry Fewell. Let's turn our attention today to positional reviews. We will start with quarterback.

Eli Manning -- Let's just acknowledge what everybody knows already -- the 2012 season was not Manning's best work.

There has been much talk about how much Hakeem Nicks' knee injury impacted the Giants' passing offense. That, however, does not excuse some of the poor decisions made by Manning in 2012 -- none worse than the decision to throw a deep ball to Ramses Barden at the end of the Week 4 game against the Philadelphia Eagles. If you really want to break it down, this could well be the single play that kept the Giants out of the playoffs. Thanks to NFL Game Pass and All-22 film here are a couple of screenshots from that ill-fated play. 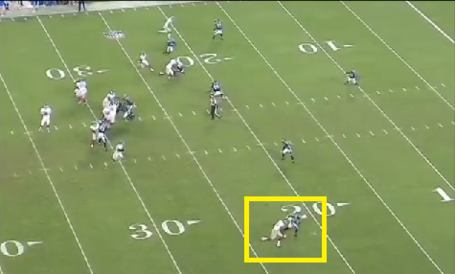 Right from the beginning of this play you can see that Barden, covered by Nnamdi Asomugha and highlighted, is not going to be open. You can also see, though, that Manning is determined to throw the ball to Barden. 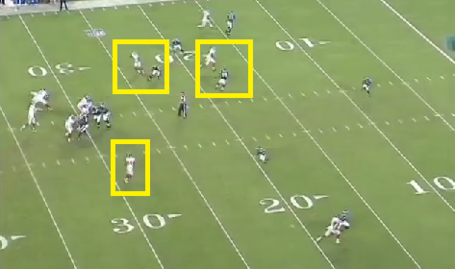 As Manning releases the ball you can clearly see that is a mistake. Highlighted in yellow you can see Manning has three better options, but throws the deep ball to the covered Barden. This ball has to go to Ahmad Bradshaw in the flat, who has only one defender to beat to make a big play of his own.

David Carr -- Played only twice and threw only three passes, completing two. He's a great backup, provided he stays in a baseball cap and doesn't need to put his helmet on and go play.

No matter who is healthy and who isn't, Manning has to play better for the Giants to get where they want to go. The job of a two-time Super Bowl MVP and the guy who is the leader and best player on a team is to lift the guys around him. In 2012, Manning didn't do that often enough. Too often he was held back by the issues going on around him.

As for Carr, he can be a free agent but I can't imagine him really choosing to go elsewhere. Curtis Painter, formerly of the Indianapolis Colts, has been signed to a reserve/futures just in case.