Todd McShay of ESPN is out with his latest 2013 NFL Mock Draft. Alabama right tackle D.J. Fluker goes to the Giants here.

ESPN draft analyst Todd McShay is out with his latest 2013 NFL Mock Draft, this one a two-rounder. McShay has given the New York Giants Alabama offensive tackle D.J. Fluker with the 19th pick of the first round, and has Boise Statecornerback Jamar Taylor going to the Giants in the second round, 49th overall.

Let's look at each pick. 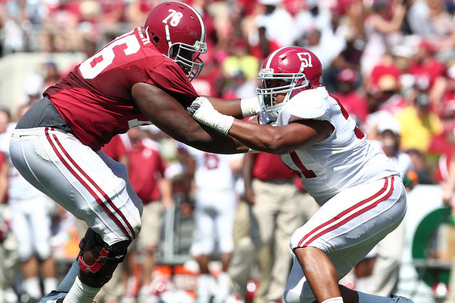 Here is what McShay wrote about the selection:

My good friend Mel Kiper rightly points out that the Giants don't usually spend high picks on offensive linemen, so this is not a slam dunk. Fluker isn't athletic enough to play on the left side, but he has developed enough balance and footwork to hold up on the right. He carries his weight well, plays hard, and doesn't show some of the scary traits massive right tackle prospects often bring to the table. And if the Giants are willing to take the likes of Chris Snee at No. 34 overall or Will Beatty at No. 60, why not a player like Fluker here? After all, over the last decade-plus no position has hit at a higher rate in the first round than offensive tackle.

Valentine's View: The closer we get to the draft the more likely it seems this pick becomes. McShay is on this pick. Tony Pauline of SI and Draft Insider has been on it for months. It seems more likely, to be honest, than the selection of Jonathan Cooper I made for the Giants in the Big Blue View Community Mock Draft. Cooper, incidentally, was off the board at No. 12 in McShay's mock, landing with the Miami Dolphins.

Fluker is a massive man, the best right tackle in the 2013 NFL Draft class, and right tackle seems like the one position the Giants have not at least adequately addressed thus far in the off season. Yes, they brought David Diehl back. The Giants would be better off with Diehl in a reserve role, however.

McShay did not offer explanations for his second-round pick. Suffice it to say, though, that no one would really argue with the Giants choosing to use a first- or second-day pick to add depth at the cornerback position.

Your thoughts on these selections, Giants' fans?