After much debate, the pick is finally in for the New York Giants at No. 19 overall in the 2013 Big Blue View Community Mock Draft.

I have tortured you guys -- and myself -- long enough. It is time for my to unveil my selection for the New York Giants at No. 19 overall in the 2013 Big Blue View Community Mock Draft.

Believe me when I say I did torture myself over this pick. I was absolutely clear on what I was going to do with the pick until I returned from the doctor's office Monday afternoon to find out the Giants had re-signed guard Kevin Boothe. I was, before the Boothe signing, committed to the idea that taking North Carolina guard Jonathan Cooper was what I wanted to do.

After learning of the signing? Well, you can ask BBV contributor Jesse Bartolis and SB Nation draft analyst Dan Kadar how much I hemmed, hawed, changed my mind and tried to talk myself into -- and out of -- a range of players. In the end, though, I'm going with my gut. I am sticking with my conviction, remembering that the Giants draft for the long-term, generally place value above obvious need (though we all know need impacts what teams see as value), and remembering that the Giants like players with unusual athletic gifts for whatever position they play. That means my choice is ... 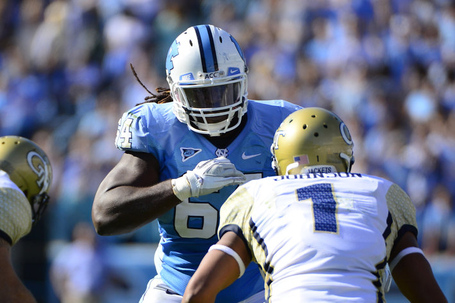 Jesse Bartolis' profile of Jonathan Cooper, the selection for the Giants at No. 19 in our BBV Community Mock Draft.

I can hear many (most?) of you screaming from hundreds of miles away. He's a guard! There is no obvious spot in the lineup for him in 2013! The Giants need a defensive end because Osi Umenyiora is gone and Justin Tuck has been terrible for two years! They need a cornerback because every one they have except Prince Amukamara is awful! They need more help at defensive tackle because Cullen Jenkins and Shaun Rogers are old, and Markus Kuhn and Marvin Austin are unproven!

I hear all of those arguments, and they all danced around in my head for the last several days. And you know what? In the end, I decided I really didn't care about them.

What the Giants have done in free agency, especially now that Boothe has returned to the fold, is brought in capable veteran players in nearly every spot that could be considered a position of need -- cornerback, linebacker, safety, defensive tackle, offensive line, wide receiver, tight end. They have at least created competition and put themselves in a position where, when it comes to the draft they can do what they like to do. That is, look at the board and take the best player who could have the longest impact over a number of years, regardless of what today's perception of team need might be.

Again and again when I looked over big boards and player rankings Cooper was the highest-rated player available. ... It proved impossible for me to pass on a player almost always ranked top 15 by analysts, and quite often top 10.

For me, regardless of the perceived lower value of a guard, that player is Cooper. Again and again when I looked over big boards and player rankings Cooper was the highest-rated player available. Consistently higher than defensive end Bjoern Warner, cornerback Xavier Rhodes, offensive tackle D.J. Fluker, linebacker Arthur Brown and pretty much any other player you might want to consider here.

It proved impossible for me to pass on a player almost always ranked top 15 by analysts, and quite often top 10. A player for whom the words 'freakishly athletic' (a phrase that always catches the attention of Jerry Reese) and 'Pro Bowl potential' turned up over and over in scouting reports.

I know there is no obvious position for Cooper to play in 2013. When, however, has that mattered to the Giants? Was there an obvious spot for Mathias Kiwanuka when the Giants took him in 2006? For Jason Pierre-Paul in 2010? For Amukamara in 2011?

The reality is that the Giants don't draft players counting on them to make huge impacts as rookies, anyway, although Cooper is apparently capable of being a plug-and-play starter at either guard spot. The Giants, rightly, draft players for the long-term, for what they can bring to the franchise over a period of years. Cooper, who could even move to center at some point, is -- for me -- the best offensive or defensive lineman available at this point in our mock. With Chris Snee getting older, Boothe signed for only a year and David Baas being a good but not great center, Cooper could end up anchoring the middle of the line for years to come, like Snee has done since 2004. 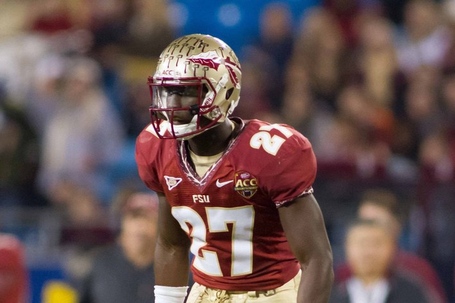 As I said earlier you can check with Kadar or Bartolis if you want to know how much I vacillated before ultimately making this decision. Here are some of the other available players I strongly considered. In all honesty, good arguments can be made for all of them and if you want to pick one and say that's the guy I should have selected I wouldn't blame you.

Bjoern Werner, DE, Florida State. Yes, the Giants love their defensive ends and Werner is a guy many thought would go earlier than this. I have just never been able to get excited about the guy. I don't see him as having the length or physical gifts that the Giants love, even if NFL.com somehow compares him to Umenyiora -- which I can't see. I could see the Giants selecting Werner, and if they did I wouldn't bash the selection. I just can't get fired up about the guy.

Xavier Rhodes, CB, Florida State. Truth be told, if I hadn't talked myself into Cooper, then out of Cooper, then back into Cooper, Rhodes is one of the two players I would considered. He has the size at 6-foot-1, 210 pounds that the Giants love and the ability to press cover. The only red flag for me is that Perry Fewell stubbornly loves his zone coverage schemes, and that is not what Rhodes does best. Still, he would be an excellent pick here.

Arthur Brown, LB, Kansas State. Kadar tried, and tried, and tried some more recently to make me feel the love for Brown in the first round. He might have succeeded, too, if the Giants had not added Dan Connor and re-signed Keith Rivers. That said, if Brown slides to the 49th pick he would be very, very difficult to pass up.

D.J. Fluker, OT, Alabama. Another admission here. I have always considered Fluker a more likely candidate to be the Giants' pick at No. 19 than many here at Big Blue View. I still do, and he is the other player I would have strongly considered if I had not chosen Cooper. If the Giants look at what they have accomplished in free agency and say, 'right tackle is the spot we haven't addressed,' Fluker could well be the guy. And I for one wouldn't complain. I could easily have talked myself into Fluker here, and you can make the argument he's a better right tackle than David Diehl or James Brewer. In this case, though, I just see Cooper as having a higher ceiling. If you want to argue that is cancelled out by Fluker's positional value, that is valid. It just wasn't the way I decided to go. 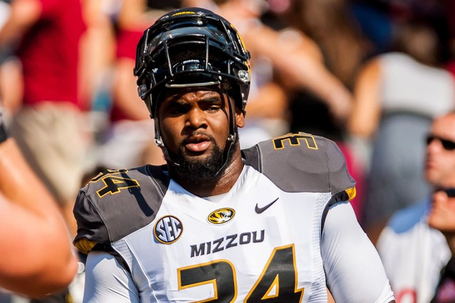 There are two players who were taken in the last few picks of our mock who I would have banged the table for had they still been on the board.

Sheldon Richardson, DT, Missouri. When our mock began I thought it was realistic that Richardson, a perfect match for the Giants in terms of skill, value and positional need, would be available at 19. Alas, the Carolina Panthers snagged Richardson at No. 14. I'm still annoyed with 'NYG_slater' for this.

Alec Ogletree, LB , Georgia. Yes, Jesse's man-crush. The St. Louis Rams stole him at No. 16, and 'Raptor22' is now on thin ice because of it. Ogletree, once you get past the character concerns, has everything you want in a linebacker in today's faster, more wide-open NFL where speed and sideline-to-sideline ability is more important than being a downhill thumper, especially if you play the weak side. With Connor as a Giant, that is what Ogletree would do.

Check out our complete 2013 NFL Draft coverage, including a Big Board, a growing list of prospect profiles, interviews with draft hopefuls and much more.

Brian Urlacher? No, thanks!