Ezekiel Ansah was often connected to the New York Giants in NFL mock drafts a couple of months ago, long before the Senior Bowl and the NFL combine. After all of that the freakishly athletic defensive end from BYU has been though to be out of reach for the Giants, often going as high as No. 5 overall to the Detroit Lions in mock drafts.

Well, somehow, in SB Nation's most recent mock draft, a collaborative effort between Dan Kadar and Matthew Fairburn, Ansah falls into the Giants' lap at No. 19. Kadar explains: 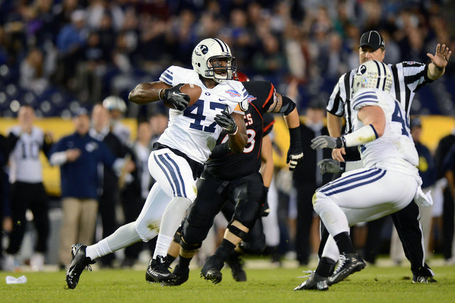 Jesse Bartolis breaks down what to expect from Ezekiel Ansah as a pro.

If Ansah isn’t picked by the Detroit Lions or Tennessee Titans, he could slip some. Don’t forget that as much of a physical talent as he may be, he’s a project player. And Ansah may exclusively be a 4-3 end. So what better place for him to land than in New York, a staunch 4-3 team with a history of developing linemen?

Valentine's View: I would be amazed if this scenario were to play out, but if Ansah were somehow sitting there at No. 19 I can't imagine the Giants letting him slide by. I suppose strange things can happen in the draft. After all, no one thought Prince Amukamara would slide to the Giants a couple of years ago.