The St. Louis Rams select a linebacker with the 16th overall pick in our 2013 Big Blue View Community Mock Draft.

The 16th pick in the first round of our 2013 Big Blue View Community Mock Draft is either going to annoy you or thrill you, depending on whether or not you would like to see the player selected become a member of the New York Giants.

That 16th pick belongs to the St. Louis Rams, with 'Raptor22' playing the role of general manager. For his pick, 'Raptor' selects ... 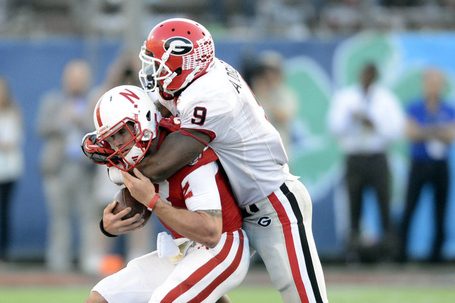 St. Louis already has two good linebackers in MLB James Laurinitis and OLB Jo Lonn Dunbar, and they lost Danny Amendola and Steven Jackson. However, I firmly believe that you build to win your division first.

Alec Ogletree is able to step right in and start across from Dunbar at OLB, providing a suitably athletic and experienced spy to combat the read/option offenses of Seattle and San Francisco. Ogletree would likely excel in a defense where he is able to use his athleticism and fly around the field and taking on blocker is something that (more often than not) happens to somebody else.

Ogletree does have a pattern of off the field red flags that give me pause, but nothing so bad as Janoris Jenkins' last year, and Jeff Fisher doesn't seem to have a problem with those anyway.

Valentine's View: This is another player who would have undeniably been in play for the Giants at 19 had he still been available. The majority opinion in the draft community seems to be that the Rams will go wide receiver here, but that Ogletree would be in play if they don't. With the skill set Ogletree possesses, which seems perfectly suited for the more wide open offenses being employed in the NFL, someone is going to look past Ogletree's checkered background and plug him into their defense.