The Giants open the preseason Saturday against the Pittsburgh Steelers. Here are the basic details.

The New York Giants will open their 2013 preseason Saturday night when they travel to Heinz Field to take on the Pittsburgh Steelers. Game time is 7:30 p.m. ET.

You can stream the game live with the NFL Preseason Live. If you are a betting man, you can find odds on the SB Nation NFL Odds Page. 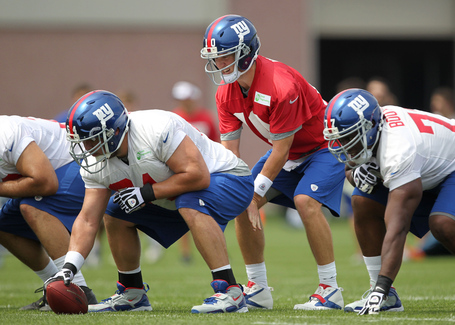 All of Big Blue View's coverage of Giants training camp.

Giants coach Tom Coughlin said this week that the starters will "probably" play about a quarter.

Among those who won't play due to injuries are first-round pick Justin Pugh (concussion), offensive lineman James Brewer (concussion), fifth-round pick Cooper Taylor (hamstring) and Terrell Thomas, coming back from two seasons lost to ACL surgeries. Chris Snee is also unlikely to play, and wide receiver Hakeem Nicks' status is uncertain as he works through a groin strain. Defensive end Jason Pierre-Paul and fullback Henry Hynoski are on PUP and not eligible to play.

The Giants will not practice Friday, as that will be a travel day.

For the Giants, safety Ryan Mundy will face the team he spent the first five years of his career with. Mundy was a 2008 sixth-round pick by the Steelers. He joined the Giants as a free agent this season. Reserve cornerback Terrence Frederick was a seventh-round pick by Pittsburgh in 2012, and did not make the roster. He was picked up late in the season by the Giants and appeared in one game.

For Pittsburgh, reserve lineman Guy Whimper should be familiar to Giants' fans. Whimper was with the Giants for four seasons, beginning in 2006.

For the Steelers' perspective on Saturday night's encounter, check out SB Nation's Behind The Steel Curtain.

Follow our StoryStream for complete coverage leading up to Saturday's game.