Justin Tuck missed Wednesday's practice for the New York Giants with a "tight back." Coach Tom Coughlin did not believe it to be a serious issue.

Justin Tuck missed Wednesday's New York Giants practice with what head coach Tom Coughlin said was a "tight back." Coughlin said Tuck, the veteran defensive end who has been plagued by injuries the past couple of seasons, could still play Saturday when the Giants open their preseason against the Pittsburgh Steelers.

"We'll see," Coughlin said. "We expect that to be the case." 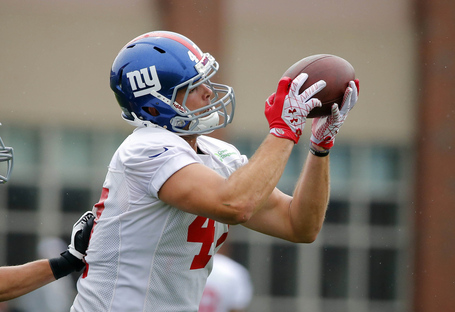 All of Big Blue View's coverage of Giants Training Camp.

First-round pick Justin Pugh is improving, and Coughlin said he hopes he will be cleared to return to practice next week. ... Coughlin said that offensive lineman James Brewer and rookie safety Cooper Taylor "won't make it this week." Brewer apparently sustained a concussion on Tuesday. Taylor has a hamstring, and Coughlin said "the doctor was pretty optimistic" about his recovery.

Coughlin said the news that Deon Grant will retire as a Giant "made me smile." Coughlin said Grant is "one of our guys" and said he hopes to have the former safety in to speak to the current team at some point.

"He did a great job when he was here," Coughlin said. "Played linebacker, played back in the secondary. We had a package basically designed to get him and others on the field at the same time ... very, very smart player. A guy who could direct traffic back there. Guys really respected him."

Coughlin said he had not yet seen Eli Manning's 'Football on Your Phone' DirecTV commercial.

Junior Mertile made the only interception of the day, picking off a Ryan Nassib pass intended for Brandon Collins. There appeared to be a miscommunication between quarterback and receiver on the play.

Collins made the catch of the day, a leaping grab over David Caldwell in the back of the end zone on a high throw from Ryan Nassib.

Wide receiver Kevin Hardy got an opportunity to return kickoffs, the first time he has done that in any of the practices I have attended.

Eli Manning and Victor Cruz hooked up for a long pass play when Cruz split Corey Webster and Antrel Rolle in what looked like a Cover 2.

Tyler Sash made a nice play on a deep ball for Louis Murphy, arriving just in time to knock the ball away from the receiver. Terrence Frederick was also in coverage.

No sign today of anything other than the traditional 4-3 defense the Giants have been running. Maybe that had to do with Tuck being sidelined, since he is the lineman who has been standing up with the first group.

The Giants seemed to emphasize the screen pass today, especially throwing a handful to the tight ends.

Editor markup for New York Giants Training Camp 2013: Ed's Photos. This is only visible in the story editor.