Tight end Larry Donnell has been impressive for the Giants thus far. Can he earn a spot on to the 53-man roster?

Could tight end Larry Donnell force his way on to the New York Giants' 53-man roster? The Giants already have three tight ends who seem certain to open the season with them -- Brandon Myers, Bear Pascoe and Adrien Robinson. Donnell, though, is certainly building a strong case for himself.

Donnell, a 6-foot-6, 280-pound tight end from Grambling, spent last season on the Giants' practice squad. Tight ends coach Mike Pope made sure to mention Donnell when asked about his group earlier in training camp. 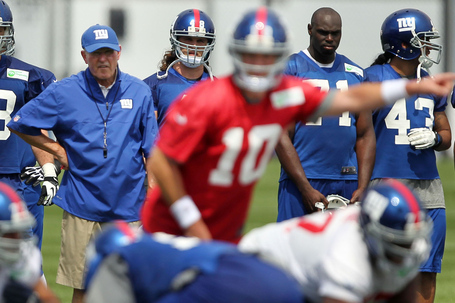 The Big Blue View Giants Training Camp Hub Page has everything you need to know about camp.

"We’d like to see if Larry Donnell can make a contribution. Certainly size and talent-wise, he has that. But he missed all the spring and mini-camps because of a broken foot, so he’s virtually just starting right now."

So far, Donnell is showing that Pope's curiosity might be justified.

During training camp practices, Donnell has shown good hands and an ability to get down the field as a receiving threat. In Saturday's preseason opener against the Pittsburgh Steelers, Donnell caught one pass for 3 yards and narrowly missed hauling in a deep ball on a high throw from Curtis Painter. Donnell played 25 snaps and was used in a Pascoe-like fashion as a regular tight end, H-Back and even some fullback. He also had two tackles on special teams.

If Donnell continues to impress over the next three preseason games he could force the Giants to keep him on the 53-man roster.