Giants' offensive coordinator Kevin Gilbride met with the media Monday. Here are some of the highlights.

The common belief throughout training camp thus far has been that the New York Giants, for the first time in several years, will keep three quarterbacks on their 53-man roster. Offensive coordinator Kevin Gilbride admitted Monday what has really been obvious for some time -- the play of rookie fourth-round pick Ryan Nassib will be the determining factor.

"Is he far enough along at the end of preseason camp that you’re saying, he can be number two," Gilbride said. "That’s a long way from being decided and if it’s not, then that will probably determine what the numbers are that we keep. We’ll keep three instead of two."

Most observers believe the answer to that question right now is no, which is good news for veterans David Carr and Curtis Painter, who are competing to be the No. 2 man if Nassib is deemed not ready for that responsibility.

Carr vs. Painter: Who Has The Edge? 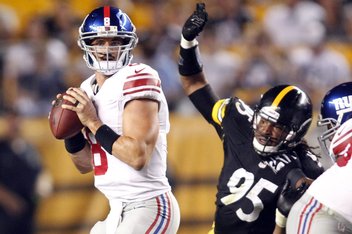 A look at the competition for a roster spot between David Carr and Curtis Painter.

Nassib saw action late in Saturday's 18-13 preseason victory over the Pittsburgh Steelers. He completed just 1-of-4 passes for 29 yards, but was sacked twice and was often under heavy duress. Gilbride didn't judge the performance based on the stats.

"I think he's played pretty well. He actually did a nice thing. He didn't get as much protection as some of the other guys got, but I thought he hung in there and I thought he was throwing the ball to the right spot,"  Gilbride said. "When he had the time, he made some good throws."

As for Carr vs. Painter, which due to his comfort in the Giants' offense could be construed as a competition heavily-tilted in Carr's favor, Gilbride called it "a legitimate competition."

We'll see how all of this shakes out over the final three preseason games, but it seems almost certain that there will be three quarterbacks on the season-opening 53-man roster.

Here are some other highlights from Gilbride's Monday meeting with reporters.

On the perception that the Giants' passing attack is a complicated one to learn:

"We teach guys to get open. That's where the complication comes, where sometimes they have guys run a 12-yard curl and that's what they have to do in other systems. We give them some flexibility to react to the way the defensive technique is being employed. In that sense it takes a little bit of time. I think, as you see, most of the receivers think it's the greatest thing that ever happened to them. The challenge really falls on making sure that he and the quarterback see it the same way."

On the development of second-year wide receiver Rueben Randle:

"He’s light years from where he was last year.  Not that there wasn’t some physical ability that I think was easily discerned by everybody, but the consistency of performance, the thing we were just talking about, reacting the right way on all the different looks that you get, in the professional ranks. That wasn’t at the level that you needed, but in terms of his work ethic, his leadership has been phenomenal, and he’s always had great hands. He’s always been a smooth route runner, he’s always going up and gotten any throw that was close. Who knows what's going to happen, but I'll be very surprised if he doesn't continue to play at a high level."