Occasionally throughout training camp we will post 'training camp questions,' delving into players or topics that will impact the 2013 season for the New York Giants. Today we focus on the much talked about and much-maligned defense.

Share All sharing options for: Training Camp Questions: Is the defense better?

The New York Giants defense finished 31st in the NFL last season in yards allowed per game, a black mark on a proud franchise known for bruising, physical, intimidating, championship-caliber defense. So far in training camp the Giants are saying all the right things when it comes to what it will take to restore the defense to its rightful place among the best in the league.

"We’re not that far removed from that and hopefully we’ll get right back to it. You have to get an identity. You have to represent something. You have to be there week in and week out," Coughlin said. "You have to have that kind of consistency and you have to control the line of scrimmage." 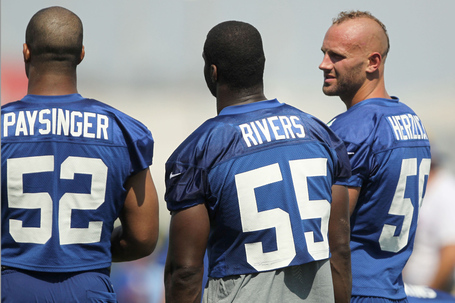 Everything you need to know about Giants training camp.

The Giants obviously did not do that a season ago, surrendering 383.4 yards per game, allowing 4.6 yards per rushing attempt (28th in the league) and placing 22nd in the NFL with only 33 quarterback sacks.

"You fall to one of the worst defenses in the league, yes, we want to be the top five or even the best defense in the league, so we’re coming out here with those motivating factors for us to get better," said veteran cornerback Corey Webster, whose struggles last season were part of the problem for the Giants. "We want to be known as one of the best defenses, want to be known as some of the defenses we had around here a long time ago, the Giants normally are known for their defense, so we want to get back to that style of play, nobody wants to let that fall on their shoulders, you know, not being the best, so we’re going to be out here working hard to do that."

Defensive line coach Robert Nunn echoed Coughlin in that he wants his group to be more physical at the line of scrimmage.

There are other examples, but you get the idea. Thus far, the Giants have talked a good game. Maybe, though, the best quote came from the much-maligned defensive captain, Justin Tuck.

"Doesn’t matter what I think. Coach Coughlin has a saying: "Well done is better than well said." For me to sit up here and talk about what we can do is just words. It really doesn’t matter. For us, we’ve really got to get in the mindset of going out there and doing it," Tuck said.

Can the Giants do it? After only four days of practice, only one with shoulder pads on and none in full pads, it is impossible to tell. We have, however, been able to glean from the first few days of camp some hints as to what will be the determining factors.

Let's look at each unit -- the defensive line, linebackers and defensive backs -- to see what the first four practices might have shown us about what is to come in 2013.

The most important factor is the health of Jason Pierre-Paul, the best player on the defense, who is recovering from back surgery. The Giants can, and will, talk bravely about forging ahead without JPP is they have to, but this defense can't be special without Pierre-Paul at his best. He won't promise a Week 1 return, saying "I'm just trying to come back when I feel like I'm ready to come back."

Tuck and Mathias Kiwanuka appear happy and healthy, but there is still no way to know how productive they can be. Rookie Damontre Moore has been a camp sensation, but as Nunn said most of that has been in his "underwear" and not in pads.

The Giants appear to intend to use veteran Cullen Jenkins, signed as a free agent, not only as a defensive tackle but as an end in "heavy" packages.

'We want to be the top five or even the best defense in the league.' - Corey Webster

Mark Herzlich is still a nice story and not much more, at least for now. Keith Rivers still has to show he can stay healthy. Spencer Paysinger and Jacquain Williams are still largely unknowns. Aaron Curry is still an under-achiever on his third pro franchise. Dan Connor and Kyle Bosworth are still players other franchises didn't think enough of to keep around.

Until proven otherwise this remains a non-descript group with no obvious play-maker.

We know that Prince Amukamara is having a good camp, and his demeanor has many optimistic about his chances to step up in 2013.

We know that Stevie Brown and Antrel Rolle should be solid at safety. In truth, we have no idea what to expect from anyone else.

Webster's play has been uneven so far, Will Hill faces a suspension, Jayron Hosley and Aaron Ross have a lot to prove and Terrell Thomas still hasn't gotten on the field.

So, lots of questions we can't answer yet.

To borrow from Tuck none of what has been said by the Giants really matters. We have seen some positive signs, like the play Amukamara and Moore, and some negative ones, like Thomas' inability to get on the field.

We just won't know anything for certain until the real games begin in September.

If the Giants can find that identity on defense that Coughlin seeks, a return to defensive domination -- and the playoffs -- is possible. If the defense is once again virtually helpless to get off the field, and again leaves the offense without much support, this season could once again come to an early end.