New York Giants defensive end Justin Tuck faced the media on Saturday, answering many of the same questions he heard throughout the off-season.

Share All sharing options for: Justin Tuck faces the questions one more time

Justin Tuck spent the off-season answering question after question about his future, his health, whether or not he could still be a top-tier player after two sub-par seasons, what he believes went wrong last season, how the New York Giants can fix it this season, and more.

Saturday, a couple of hours before the first practice of training camp, Tuck faced those questions one more time from the assembled media throng. Standing on a podium at the Quest Diagnostics Training Center, arms folded behind his back and looking he was about to have a root canal, Tuck went through what has become somewhat of a ritual one more time.

Tuck admitted that he has heard all of the talk that he is done as a premier player. 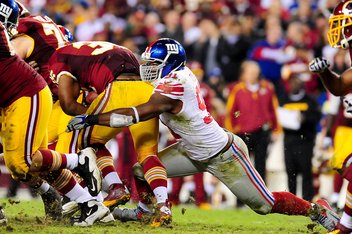 'UptownMurf' breaks down why he believes Justin Tuck can have a big season in 2013.

"Well honestly, the one thing I don’t need is motivation but I’ve found a lot of it this off-season. So for all of you ignorant writers out there, thank you," he said.

The 30-year-old Tuck, entering his ninth season, added that he does understand why he keeps having to answer the question.

"That's why you don't see me upset about them. Listen, you guys have a job to do and you do it very well. I understand that," Tuck said. "I understand where I am in my career and what I've done and the things I still want to do. But again, me looking back at the past is not going to help me move forward. That's what I'm trying to do, move forward."

Valentine's View: Tuck's head appears to be in the right place. His shoulder and his overall health are seemingly as good as they are going to get. He seems genuinely invested in leading the defense and making sure things are done right. The only question that remains is what he can do on the field. That's one he can't answer in a press conference.

Here are some of the other highlights from Tuck's meeting with the media.

"I'm ready to go. And I think that's the big thing for me, just staying healthy. Right now I feel great."

'Doesn't matter what I think. Coach Coughlin has a saying: "Well done is better than well said." For me to sit up here and talk about what we can do is just words. It really doesn't matter.' - Justin Tuck

On what he took from last season ...

"Honestly, what stuck out is that we didn't play consistent. There were some games we played great and we played the type of football we're accustomed to playing around here, and some weeks where you scratch your head and say, "yeah, that wasn't the team we wanted to be that week." I think it comes down to being consistent, trying to be the same team every week. That goes to the preparation during the week and making sure that we're in the right mindset every week, whether we're coming from a great win or a bad loss. Just being...and understanding that it's a long season and we can't allow ourselves to be on those rollercoasters like we have been."

On whether he has questions about the defense, which ranked 31st in the league last season and has several new players ...

"Sure, I do. But one thing I understand is this: there's a reason why I do have those questions. We haven't practiced yet. It's a process, and we've got to go through that process. There's a process to building a winning team, and a process to building a losing team. Unfortunately, I know both processes. We're just trying to do it the right way and do the right things and come out here and work our butts off."

"I don't know. Doesn't matter what I think. Coach Coughlin has a saying: "Well done is better than well said." For me to sit up here and talk about what we can do is just words. It really doesn't matter. For us, we've really got to get in the mindset of going out there and doing it. Like I said, it starts out there today on that football field. Creating an identity for this defense and creating an identity for this team. That's the only thing I'm focused on. I'm not worried about what other people think we can do. For that matter, it doesn't really matter what I think we can do. It doesn't really matter what I think, it's all about what we're going to go out there and do. And that's what it starts with, going out there and doing it."