Giants Vs. Panthers, All-22 Review: Carl Banks Chimes In

Share All sharing options for: Giants Vs. Panthers, All-22 Review: Carl Banks Chimes In

In this week's 'All 22' review of the New York Giants 36-7 victory over the Carolina Panthers we have a special treat for you. Carl Banks, legendary Giants linebacker and current radio analyst, has offered us some observations. These were unsolicited, incidentally, so we thank Carl for taking the time to help us see the game through the eyes of someone who played the game well at the highest level.

With that said, let's look at the observations Carl passed along.

Barden, of course, had a career day with nine catches for 138 yards. Taking nothing away from what Barden accomplished, Banks said the Panthers' scheme made it easy on Barden.

"Panthers played their single high Free safety 20-23 yards deep. Very unusual it looked like he was fielding punts. Barden just had to win at the LOS with a good release and a clean route at 18-29 yards the plays were pitch and catch. Also working Cruz underneath because the MLB took deep drops in Tampa 2 to compensate for safety depth of 23 yards."

The screen shots below from the All-22 illustrate Banks' point. This is the first play of the second quarter, a 20-yard completion from Eli Manning to Barden. 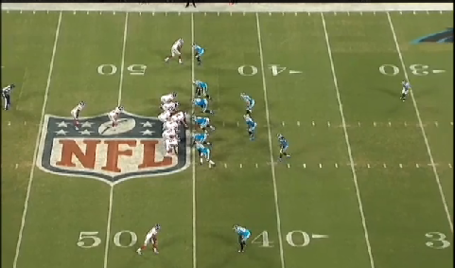 At the snap you see Barden (top of the screen) one-on-one with a cornerback. The Panthers have a single-high safety 15 yards off the line of scrimmage. Watch what happens in the next image. 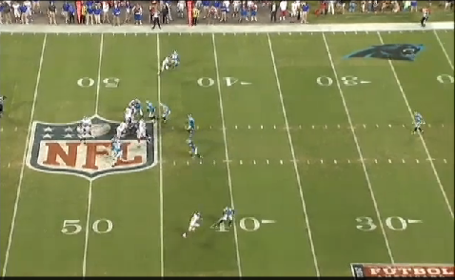 The safety backpedals to a middle-of-the-field depth of 20 yards. There is no way he can help on Barden or Victor Cruz (bottom of the screen). This turns into an easy completion to Barden, seen below. 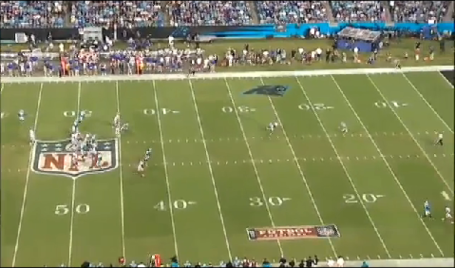 Barden wins to the inside and the safety, now a full 27 yards off the line of scrimmage, is of no help on the play.

It was not a great night for the second-year quarterback. The Giants intercepted him three times and held him to 6 yards rushing.

"Perry Fewell had a great plan vs the option. They pre-determined the results of every option by attacking Newton. They wouldn't allow their player to be "lost in space" trying to "feather" between Cam and the pitch guy (back) they went straight to Newton. Which most teams don't. See the 1st option played by Rolle. It seemed to throw Newton off when Rolle didn't "feather". Rolle leveled a big hit on Newton at the LOS. That play set the tone.

"Newton vs. pass defense. Here Fewell had the defense in a great rythym by mixing blitz and showing blitz and dropping 7. Because they got hits on him early he really never got comfortable. Thus throwing balls into coverage. See Boley interception and the end zone interception. Defense also played combo coverages doubling Steve Smith while zoning every where else."

The Rolle play is shown in the image below. It did go for 7 yards and a nice play Corey Webster prevented a bigger gain, but Banks points out that it showed Newton he has going to pay a price for running the option. 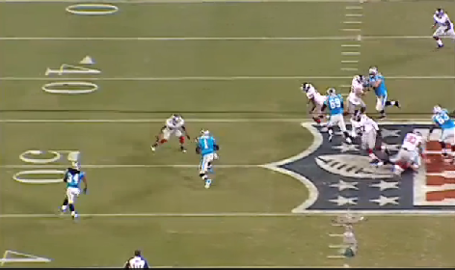 Newton runs an option to the left. that is Rolle in perfect position, as Banks pointed out.