It is time for the traditional post-game 'Kudos & Wet Willies' review. As you can guess, lots of 'Kudos' and very few 'Wet Willies' following the New York Giants' impressive 36-7 dismantling of the Carolina Panthers on Thursday night.

Ramses Barden: The Giants waited three-plus seasons to see Barden do what they thought he could do when they traded up to select him in the third round of the 2009 draft. His nine catches equaled his output from a season ago. Let's hope he can continue being a presence in the Giants' passing game. [Barden post-game reaction]

Andre Brown: The running back gave tons of credit to the Giants' offensive line and fullback Henry Hynoski after his 20-carry, 113-yard, performance. That was well-deserved, but the truth is Brown did a lot of the work himself. His 31-yard carry was 2 yards worth of everybody else, 29 yards worth of stiff arm in the face of Carolina's star linebacker Jon Beason. As he did Sunday against Tampa Bay, Brown showed quickness, power, decisiveness and the ability to make a quick cut and get through a hole. [Brown post-game reaction]

Eli Manning: Didn't bother waiting for the fourth quarter to dial up his magic this time. He cut the Carolina defense apart right from the first snap. Manning finished 27-of-35 for 288 yards and one touchdown. His passer rating was 110.2.

Offensive line/Henry Hynoski: I have to put them together here. Terrific work by the offensive line. One sack of Manning, which was really a poor block by Brown, and the quarterback generally had a clean pocket to throw from the entire night. The run-blocking was excellent, as well. As for Hynoski, he was leading the way on many of Brown's charges through the line and I don't remember him missing a block all night. By the way, I think Brown's decisiveness and willingness to get north/south quickly is helping these guys run block.

Tom Coughlin: Everybody outside the Giants' locker room -- myself included -- thought this would be a very difficult game for the Giants. A road game against a good team on a short week, especially one with a non-traditional offense to prepare for, had all the signs of trouble. Coughlin, though, sold it to his players as an opportunity. And they were ready. It's hard to remember the last time the Giants won a game so easily. [Coughlin post-game reaction]

Lawrence Tynes: A 5-for-5 night, including field goals of 47 and 49 yards. The veteran kicker is striking the ball as well, if not better, than he ever has.

Corey Webster: A much better performance from Webster this week, and he did a lot of it while playing with a broken hand.

Jason Pierre-Paul: The guy just continues to amaze. The stats show three tackles, a half-sack and two passes defensed. They don't come anywhere close to showing his impact on the game.

Spencer Paysinger: When your role is special teams, you live to make one big play at a critical time. Paysinger did that at the start of the second half Thursday, causing a fumble and then recovering it at Carolina's 19-yard line. That pretty much squashed Carolina's comeback thoughts right away. 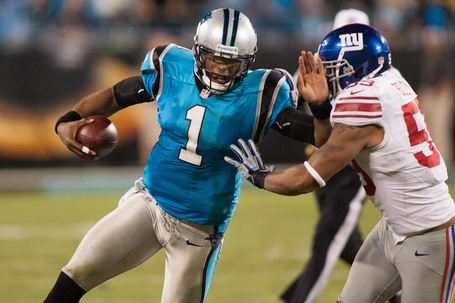 Cam Newton: Forget the 16-for-30, three interception, six yards rushing performance. It's Newton's post-game pout and his refusal to give the Giants any credit that land him here. C'mon, Cam. Grow up!

The camera person who injured Antrel Rolle: What the heck was that person (insert your own stronger word) doing sitting cross-legged on the ground just a few yards from the field? That's a danger, as we saw, to the camera person and -- most importantly -- the players. I don't know if that is against the rules, or at least NFL protocol, but sitting there immobile like that certainly should be. It is during training camp when reporters are on the sidelines. You can't sit, or place any objects on the ground a player might trip over. If that isn't a rule on game days it should be. If it is and the Panthers weren't vigilant in enforcing it, shame on them. Fortunately, it appears Rolle has a lacerated knee from slamming into the camera and not something more serious.

Brad Nessler and Mike Mayock: I have to tell you these guys actually made me pine for Joe Buck and Troy Aikman. Thank God we don't have to listen to Nessler talk about Henry Hisnoski any more. Mayock, in particular, was terrible. He is great at analyzing the draft, not go great at doing in-game color commentary. He mis-identified players more times than I could count. He insisted all night that no starter on the Giants' offensive line had less than seven years experience. You'd think somebody would have told him Will Beatty is in his fourth year. Stick to what you do best, Mike. This isn't it.

The Giants are now through a weird Wednesday-Sunday-Thursday start to their season with a 2-1 record. Despite the season-opening loss to the Dallas Cowboys that is actually something they should feel good about. ... I did not list him in the 'Kudos,' but it was good to see Prince Amukamara play a significant number of snaps. He had one beautiful pass defensed, reaching in his left hand to deny a play that looked like it was going to be a 20-25-yard completion. ... The Giants have the Eagles next. Aside from a Monday game against the Redskins on Dec. 3, the rest of the Giants' games this season are on Sunday. Thank goodness!