Giants Vs. Panthers, What To Watch

Share All sharing options for: Giants Vs. Panthers, What To Watch

The New York Giants (1-1) face the Carolina Panthers (1-1) in a difficult Thursday night road game for the defending super Bowl champions this evening. Here are a few things to watch for.

How the Giants defend Cam Newton: The Carolina quarterback is really unlike anyone else in the league, and the Panthers run an offense unlike any other because of it. They use shotgun all the time, and they utilize lots of read-option type running and designed quarterback runs. How will the Giants handle that? Will they have a 'spy' on Newton much of the time? The short week hurts the Giants' preparation. What helps the Giants, though, is the athleticism of their defensive ends and the fact that they have Michael Boley, Keith Rivers and Jacquain Williams -- linebackers who can run.

The Giants' secondary: The problem here is the same one that has existed for the past several seasons, no matter who has been back there. When the pass rush doesn't get home the Giants are susceptible to the big play. The return of Prince Amukamara (high ankle sprain) might help, but he is admittedly less than 100 percent. Whether the Giants change their scheme or not, Corey Webster has to play better than he has the past couple of weeks. However they do it, and whoever they do it with, the Giants have to cover better than they have the first two weeks. 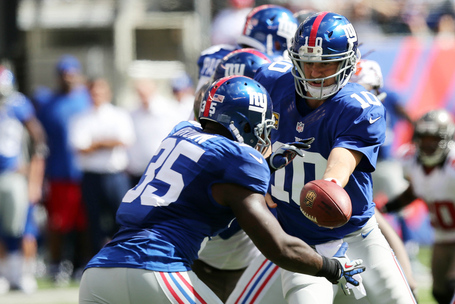 When Eli Manning hands the ball off on Thursday night Andre Brown will likely be the one taking it from the Giants' quarterback. Anthony Gruppuso-US PRESSWIRE

Who will Eli Manning throw to?: No Hakeem Nicks. No Domenik Hixon. We know Manning will try to throw to Victor Cruz. A lot. But, we also know the Panthers aren't stupid and Cruz will draw two or three defenders everywhere he goes. Can tight end Martellus Bennett be more consistent and give Manning an option? Will Ramses Barden be able to do a Nicks' impersonation and -- finally -- come up big for the Giants? Will this be the night Reuben Randle shows that he really is an 'NFL-ready' receiver. Somebody other Cruz has to make plays for Manning, or the Giants are going to have a tough night.

Can Andre Brown do it again?: Subbing for the injured Ahmad Bradshaw last Sunday Brown carried 13 times for 71 yards, the best game of his career. With Bradshaw out, and David Wilson still struggling to overcome ball security issues and gain the trust of Tom Coughlin, Brown will have to carry the load again.

Giants' pass rush: Memo to Justin Tuck and Osi Umenyiora. Fellas, the season started a couple of weeks ago. Jason Pierre-Paul is a great player, maybe the best defensive end in the league, but he needs some help. That's what you guys are there for.