After coming off a dramatic 41-34 victory over the Tampa Bay Buccaneers, the New York Giants (1-1) will play their first road game of the season against the Carolina Panthers (1-1) on Thursday night.

The Panthers are coming off a victory themselves, and a big one over the New Orleans Saints, 35-27. They have their star second-year quarterback Cam Newton and their star wide receiver Steve Smith doing damage on offense. The Panthers are weaker defensively, but they held up well against the Saints.

Newton is entering his second season in the NFL as the Panthers starting quarterback and was the Offensive Rookie of the Year a season ago. The team just went 6-10 in 2011, but Newton put up numbers that would make your fantasy teams stand out. So far this season he has thrown for 556 yards, two touchdowns, and has a 100.8 quarterback rating. He threw for 253 yards against the Saints last Sunday and rushed for 71 yards in 13 attempts. Newton is one of those running quarterbacks that will not hesitate to take the ball himself if he sees an opening, which will need to make the Giants linebackers and defensive front extra aware. 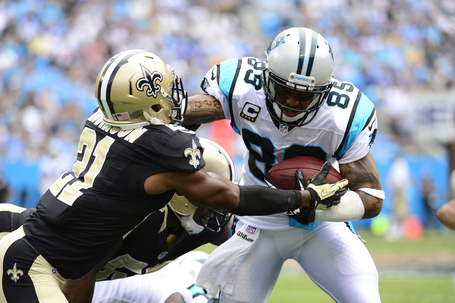 Smith is Newton's No. 1 target. So far this season Smith has 210 yards has 210 yards receiving but no touchdowns and is looking to change that this week against the Giants. Smith is suffering from a sore knee.

It was, however, the running game that shined against the Saints this past week. Newton, DeAngelo Williams, and Mike Tolbert all scored touchdowns on short runs and ran for 219 yards all together. All of these guys have the speed and the awareness to get through the line, which like mentioned earlier the Giants defensive front needs to keep aware of.

Newton so far this year has been sacked four times, and going against a defensive end like Jason Pierre-Paul, the Panthers' tackles Jordan Gross and Byron Bell need to provide better protection for their quarterback. The Panthers' offensive line limited the Saints to one sack this past week, but gave up three against the Tampa Bay Buccaneers.

The weaker part of the Panthers team is their defense. They defeated the Saints with their running game, but the defense still let them have 27 points to keep them in the game.

The rush defense has been a problem so far this season as they've given up 293 yards so far the first two weeks. Ahmad Bradshaw is the Giants biggest rushing weapon, but his neck injury could prevent him from playing on Thursday. However, Andre Brown put on an impressive show in his place on Sunday and the Giants' fullback Henry Hynoski was also impressive making big blocks for the running backs. Defensive tackle Dwan Edwards does have 2.5 sacks so far this year, and he'll need to take advantage of getting to the quarterback especially with a banged up David Diehl.

The passing defense has been the better side for Carolina limiting opponents to 225.5 yards per game. However, they are facing Eli Manning, Victor Cruz, and Hakeem Nicks, all of whom can make lives for cornerbacks a nightmare. Despite the three interceptions Manning threw in the first half against Tampa Bay, he still threw for 510 yards and three touchdowns, proving he can overcome any disaster. Carolina will have to find a way to shut down Manning and his late game talents if they want to stay in this game.

The Carolina kicker is Justin Medlock. So far this season he's had just one 21-yard field-goal attempt. Their punter Brad Nortman has had 10 punts this season for a total of 378 yards and is averaging 42.8 yards per punt. His longest punt so far this year went 58 yards and he has landed four of them within the 20-yard line.