Here are your weekly 2012 New York Giants' Roster Power Rankings. We started this a week ago, and it seems like it was well received, so we will keep doing it.

After the jump you will see a good bit of shuffling. Including some moves up and down the board that seemed pretty unlikely before Sunday's game.

1. Eli Manning -- Maybe you were ready to argue about this after his three-interception first half on Sunday. Now? After a career-best 510-yard passing performance in a rousing 41-34 come-from-behind victory over the Tampa Bay Buccaneers there is no argument. LW: 1

2a. Hakeem Nicks -- After a 10-catch, 199-yard performance that showcased determination as well as raw ability Nicks moves up the ladder. LW: 5

2b. Victor Cruz -- In all honesty you can't really separate Cruz from Nicks. They help each other, and they help Manning and the Giants. An 11-catch, 179-yard game for Cruz on Sunday re-affirmed how special he is. LW: 3

4. Jason Pierre-Paul -- Didn't so much move down this week as Nicks and Cruz moved up. LW: 2

5. Antrel Rolle -- The play he made knocking the ball out of Mike Williams' hands toward the end of the game Sunday might have been a game-saver. LW: 9

6. Kenny Phillips -- Nine tackles. He wanted a more active role in the defense, and right now it looks like he is creating it. LW: 8

7. Justin Tuck -- This continues to be higher than his stats probably warrant. Maybe it's just me, but a can't put him lower than this. Yet. LW: 4

8. Martellus Bennett -- I find myself amazed that Bennett is this high on the list, and I'm not sure he really belongs this high. But, here he is. LW: 15

10. Ahmad Bradshaw -- The best thing he did Sunday was get hurt and get out of Andre Brown's way. Still, he belongs up here because of how important he is to this team. LW: 6

11. Linval Joseph -- Everybody talks about the Giants' defensive ends, but the Giants are getting better work from Joseph (and Rocky Bernard) thus far than they are from Tuck or Osi Umenyiora. Joseph had four tackles (one for a loss) and two quarterback hits on Sunday. LW: 16

12. Rocky Bernard -- Five tackles on Sunday from a guy who continues to play good, if unnoticed, football. LW: 17

14. Corey Webster -- His play the first couple of weeks really should land him lower on the list. This is still a fall. LW: 7 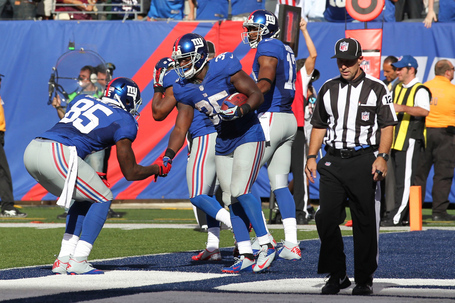 16. Sean Locklear -- A big, and surprising, jump for the offensive tackle. He gets props for switching sides Sunday and being part of a giants' offensive line that did not allow a sack in 51 pass attempts.

17. Jayron Hosley -- Big jump for the rookie corner, too. He made his first NFL start and played better than any other corner the Giants had, including Webster. LW: 31

18. Chase Blackburn -- He isn't giving up the middle linebacker job any time soon, it seems. LW: 22

23. Henry Hynoski -- The fullback gets props for his first professional carry, a 3-yard gain. LW: 20

25. Steve Weatherford -- I had to drop him a bit this week, because some guys are deserving of moving up. LW: 12

26. Will Beatty -- Props for handling 70 snaps and holding up well in his first extended duty. LW: 34

34. Keith Rivers -- Didn't play Sunday because of a hamstring issue, but he gets a little slack because he played well against the Dallas Cowboys. LW: 28

35. David Wilson -- Had a nice kickoff return of 44 yards, but sank deeper into Tom Coughlin's doghouse with a dropped pass. Played only six offensive snaps. LW: 32 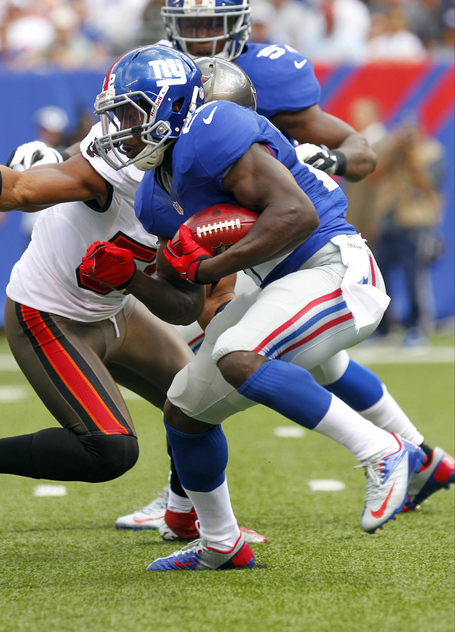 37. Markus Kuhn -- Played four snaps on defense. Tough to put him any higher than this. LW: 33

38. Justin Tryon -- His play at corner has been a major issue the first two weeks of the season. Moves up, but only because he is getting a few snaps. Not because he is actually doing anything good with them. LW: 41

39. Prince Amukamara -- Inactive again on Sunday. A big drop in the rankings for him this week, and the only way he reverses it is to get on the field. LW: 19

40. Adrian Tracy -- Did not appear on defense, but forced a fumble on special teams. Make a play, move up in the rankings. And in the eyes of the coaches. LW: 44

45. Mark Herzlich -- Remember when we talked about him taking over at middle linebacker? LW: 39

48. Marvin Austin -- Active Sunday, but still did not play a snap. Needs to actually get in a game to move up the list.

53. Jerrel Jernigan -- A healthy scratch for the second week in a row. Drops to the bottom spot because Mitch Petrus was actually active Sunday. LW: 52