In his post-game remarks on Sunday New York Giants coach Tom Coughlin said "A lesser group of men would have had trouble," coming back from a 27-13 deficit in the third quarter.

We know all about the resolve of the amazing quarterback, Eli Manning. The wide receivers he depends on, Hakeem Nicks and Victor Cruz, showed some resolve as well on Sunday.

Nicks, bad foot and all, caught 10 passes for 199 yards. Cruz caught 11 for 179. Both players had plenty of reasons not to perform as well as they did on Sunday, but came through when needed. Nicks, of course, has the foot issue. Cruz was coming off the three-drop game in the season opener and dealing with the death of his grandmother last week.

"It showed our determination. We knew we were capable of doing it as a team. We never doubted ourselves. Not one time did the team get down on ourselves. Everybody was always saying we were going to come back, we got it. And we knew what were capable of doing. Coach Coughlin mentioned at halftime it was a new game and coming out the second half and that's how we approached it."

Hakeem Nicks: All you can do is admire what Nicks did on Sunday. He had 10 catches for 199 yards playing on one healthy foot. He made a 50-yard catch that set up the winning score in the final minute. He also had two other catches of at least 20 yards. Oh, and all of this while coming out of the game hobbling on his injured foot on a handful of occasions. The guy can barely practice. He sure can play, however, and the Giants sure do need him.

Eli Manning: As Jesse wrote earlier, if NFL games were three quarters, the Giants might be one of the worst teams in the league. And people might think Manning wasn't very good at all. But, boy is he good! After setting a league record with 15 fourth-quarter touchdown passes a season ago, Manning fired two of them Sunday as the Giants scored 25 fourth-quarter points. Through two games Manning has a 91.6 passer rating overall, but 156.3 in the fourth quarter. Maybe Giants' games should just start in the fourth quarter.

Victor Cruz: Ten catches for 179 yards, including an 80-yard touchdown and salsa dance. No drops. This was Cruz at his his best. And the giants needed all of it.

Andre Brown: So, this is why the Giants kept Brown around for the past couple of years. And why they cut D.J. Ware at the end of the preseason. With Ahmad Bradshaw sidelined by a neck injury and the Giants not trusting rookie David Wilson for more than spot duty (during which he dropped a pass) Brown had the best day of his NFL career. He carried 13 times for 71 yards, a lot of that coming on hard, impressive running right up the middle.

Offensive line: Manning passed the ball 51 times and was never sacked. That is the most times he has ever passed the ball in his career without being sacked. The hard straight-ahead running of Brown helped the running game, but there were also some creases for him to run through. The Giants gained 94 yards on 25 rushes (3.8 yards per carry). Not great, but an improvement. Will Beatty took two false start penalties, but I will be curious to see the Pro Football Focus grades and watch the All-22 film to get a better idea how well he played.

Jayron Hosley: Starting because Prince Amukamara was inactive and, bluntly, Michael Coe and Justin Tryon aren't very good, the rookie third-round pick held up well. He had six tackles, including five solos, and didn't give up any big plays. Of course, maybe he looked good because Tryon and Corey Webster looked so bad.

Kenny Phillips: Nine tackles (six solo), a pass defensed and a huge hit on Vicnent in the second half that seemed to energize a team that looked like it was in trouble, trailing, 27-13.

Antrel Rolle: Eight tackles (five solo) and a pass defensed. rolle's biggest play, and the real reason he is on the list, is the hit on Mike Williams that knocked the ball out of his hands at the Giants' 16-yard line in the closing seconds. The play was originally ruled a catch, but then reversed. Without that play, the Giants might have ended up in overtime.

Tom Coughlin: He might be the league's oldest coach, but you get the idea that the old man would never back down from a fight. Good for him for getting in Greg Schiano's face after the game. Oh, and for creating a team that doesn't quit.

Justin Tryon: A year ago I thought this guy was a player. Now I am understanding more of why an Indianapolis team that was terrible in 2011 let him go. You can't give up that pass to Mike Williams at the end of the game. Do something. Anything. Don't just stand there and watch him catch it.

Corey Webster: Toasted by Vincent Jackson all day. The guy is supposed to be the Giants' best corner, and he is playing like a guy who is a liability through the first two games. He had an interception, but only because he happened to be standing right where Josh Freeman threw a horrible pass.

Greg Schiano: He can defend the kneel down knock down of Eli Manning all he wants, but that was a bush league play at the NFL level. To have his linemen low-bridge the Giants' linemen and risk injury when the game is over is nonsense. 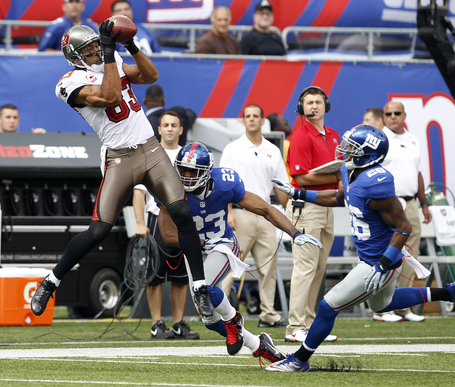 Corey Webster (23) had a rough time Sunday trying to handle Vincent Jackson of the
Tampa Bay Buccaneers. William Perlman/THE STAR-LEDGER via US PRESSWIRE

Martellus Bennett: With five catches for 72 yards, including a huge 33-yard touchdown reception in the fourth quarter, you might think Bennett deserves 'kudos.' I don't. He dropped two balls that would have been touchdown passes and ran a horrible, rounded route in the end zone in the third quarter that caused an incompletion in the end zone. The Giants would not have needed so many late-game heroics if Bennett had been better in the first three quarters.

Will Beatty: A couple of false-start penalties and a dropped pass (that should never have been thrown to him). Beatty, though, played nearly the entire game and was part of an offensive line that kept Manning upright the entire game. A mixed bag for him, but he deserves some credit.

David Wilson: A nice kickoff return of 44 yards, but he buried himself deeper in Tom Coughlin's doghouse by dropping an easy pass across the middle. Carried the ball only three times for six yards and watched Brown emerge as a guy who can help the Giants, and take some of Wilson's carries.