New York Giants fans can only hope that when their team hits the field for Sunday's 1 p.m. ET kickoff against the Tampa Bay Buccaneers the players are as cranky and ticked off as head coach Tom Coughlin has been all week.

On Wednesday, Coughlin was short with reporters during his weekly press conference.

"None of us have slept well. I hope the whole room is full of people that didn't sleep well. That's the point," Coughlin said.

He later added, succinctly, "Didn't like what we saw for the most part in the first game."

With good reason, of course. The defending Super Bowl champion Giants lost to the Dallas Cowboys, 24-17, at home. They played much more like the team that began 2011 7-7 than the team that won its last six games to earn the fourth Super Bowl title in franchise history.

A loss on Sunday, especially, a second straight one at home to open the season, would put the Giants in a difficult situation the rest of the season. From ESPN, only 12 percent of the NFL teams who have started 0-2 since 1990 have made the playoffs. Only three times has the defending Super Bowl champion started the season 0-2.

"We talked all week about playing and practicing better, having better energy, having a sense of urgency about getting our football right, right now, as I say it," Coughlin said. "I think they've got the message."

He, and Giants' fans, hope the veteran coach is right about that. 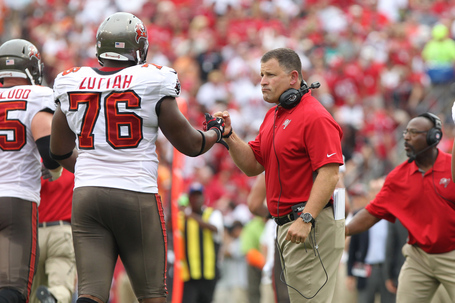 Storylines: Tampa Bay coach Greg Schiano returns to New Jersey. Schiano, a rookie head coach in the NFL, was head coach at Rutgers for 11 seasons. [Kelsey on Schiano | Ed on Schiano] ... Buccaneers offensive coordinator Mike Sullivan and defensive coordinator Bill Sheridan are former Giants coaches. [Full Sheridan/Sullivan Story] ... D.J. Ware is the third-down back for the Bucs after holding that job for the Giants last season.

What to watch: Time of possession will be critical. The Giants ran only 56 offensive plays against the Cowboys. The Buccaneers held the ball for more than 37 minutes against Carolina.

[Ed on What To Watch | Kelsey's Buccaneers Scouting Report]

Other good reads from the past week

In case you missed these:

- Buccaneers, Beyond The Box Score