The Tampa Bay Buccaneers shocked football fans everywhere when they hired Greg Schiano to be their head coach. Schiano was the head coach of Rutgers University for 11 years, had one ranked team, and went 68-67.

His transition to the professional stage has certainly been an interesting one, but it's not really the playing of football that's been so different.

"It's all the other stuff; you don't recruit now, but you evaluate personnel, there's contractual things." said Schiano. "There's not an NCAA, but there's a CBA, and I thought leaving college and the NCAA there wouldn't be as many rules. That's the adjustment."

This won't be the first time Schiano has coached in at the new stadium in the Meadowlands. This Sunday when Tampa Bay faces the New York Giants will, however, be Schiano's first trip back to New Jersey as an NFL coach since he joined the Buccaneers.

"I remember when the first Giants Stadium was built. We used to drive past it on the way to Grandma's every week," said Schiano. "She lived in Rutherford, so I watched that thing come out of the ground. Now to be playing in MetLife Stadium in the Meadowlands, and to actually be coaching an NFL team, I probably won't be thinking of it very much, but it is fun. I enjoy every game, like I told you guys before; game day is the best day of the week. Doing it back there will especially be good, but if we don't play well, then it won't."

This will be the first time Schiano is coaching at MetLife Stadium since the tragic accident of his former player Eric LeGrand. LeGrand suffered a spinal injury that ended his football career in October of 2010 while playing a game against Army. During this offseason, Schiano made sure LeGrand was part of the Buccaneers family for at least a short time when he signed a contract with the team in May. He announced his retirement in July to free up a spot on the roster. Schiano said that he's always had a good relationship with LeGrand at Rutgers before his injury occurred.

"As a college coach, you go into people's living rooms and kitchens, you tell them, I never told anybody that I would treat them like my own son because I think that's not possible, but I did tell them that I would treat them the way I would want my sons to be treated," Schiano said. "When something like this occurs; there are certain players that you get closer with, that's just human, and I certainly was very close to Eric before his injury because he was just such an upbeat, positive guy. When something like this happens, and you spend so much time together, under so much stress, the relationship grows and grows. I'm glad that we were able to get him as a free agent and he could at least have the opportunity to go through the process. Even though it was different from his planned process, at least he got to go through some part of it."

Schiano is looking to keep his team's head up high after their Week 1 victory against Carolina, but knows Week 2 won't be easy coming to the Meadowlands to face the Giants. Having former Giants coaches like Eli Manning's former quarterback coach Mike Sullivan on the Buccaneers' staff is helpful, but not always the solution.

"We're coming home to play the defending Super Bowl champions who are not in a real good mood right now, so we need to bring our best game just to have a chance to win," said Schiano. "[Sullivan's] been a big help, but on the flip side, the Giants know what's on the inside of his brain. It goes both ways. There's a lot of similarities with our offenses, but they're different players that are doing it. Eli is so far along in the process of being in that offense, where Josh [Freeman] is so new to this offense. So there's a whole bunch of differences, but it's a bunch of similarities as well." 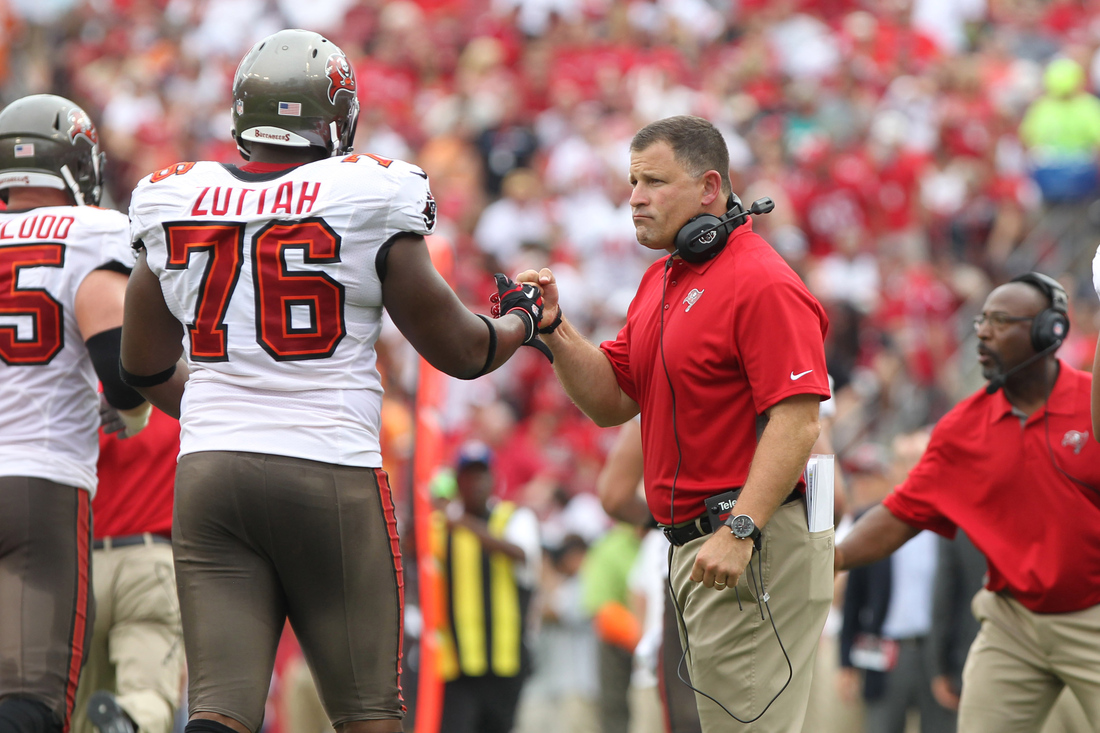 Schiano is hoping his players keep a level head going into this Week 2 game against the Giants, as he knows how hard his players have been working since he joined the team.

"I hope that our players over time -- we've been together six months or so -- that they believe in what we're doing, and that one game's result won't turn the tide, but it is nice that we did win and that we are able to enjoy a victory together," said Schiano. "You know how this league goes, it's a streaky league, you can get on a win-streak or you can get on a losing streak. It was a bit of relief to get that first one."

Schiano speaks highly of Giants' head coach Tom Coughlin and hopes to be able to have a similar career as a head coach in the NFL.

"I respect the heck out of him," said Schiano. "I studied the things that he's done. He made the jump from a program that he kind of put in back order and went to the NFL. There are some things that I've studied about how he's done it. I really look up to his attention to detail and the way he prepares his football teams in every aspect. I hope that I can just do a similar job. I don't think I'm anywhere near to point where I can do what he's done right now, but certainly trying to get there."

Schiano isn't looking at this as building team, but rather a team that needs to start winning football games. So far they're off to a good start.

"I don't know if there's such a thing as building years in the National Football League. I think everybody is win-now," said Schiano. "Can you do it, that's the other part of the equation? I know these guys, and I know these coaches, and I know myself, and we're trying to win every week and that's our only goal."